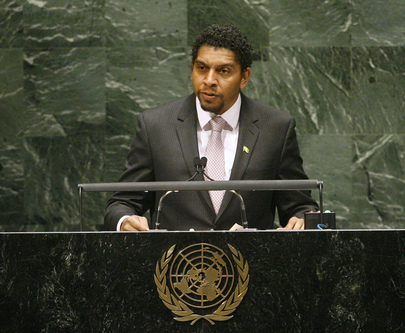 CAMILLO M. GONSALVES ( Saint Vincent and the Grenadines) opened by saying the centrality of the United Nations was being challenged as never before. Various organizations and small groupings of States with selective membership and opaque modus operandi were becoming global decision makers. It was irrelevant whether those groups had formed to respond to, or had precipitated, the declining effectiveness of the United Nations. “We face the real threat of devolving into a mere talk shop, an amalgam of unwieldy bureaucracies,” he said, offering suggestions to “defend our role.”

Among others, he called for consistency in the rules in cases of ongoing disputes such as online gaming, which was adjudicated by the World Trade Organization. He also noted that agency’s rulings that gutted the country’s once-thriving banana industry. Further, he said that resolutions adopted must not be treated as a “buffet”; Member States could not pick and choose to champion some decisions and disregard others. Also, donor countries needed to account for commitments that were voluntarily taken. Much was written about “donor fatigue,” but less was said about “commitment fatigue”, which was the developing world’s exasperation with oft-made but seldom-honoured promises and pledges. It was puzzling how some suffered donor fatigue when they had yet to donate what was originally promised. He added that small States did not have the capacity or desire to establish entire bureaucracies dedicated solely to navigating the administrative labyrinth of irregular aid flows.

With regards to specific situations, such as Haiti’s earthquake, he mentioned the donors conference in March, in which over $10 billion was pledged for the recovery effort. Today, some six months after the earthquake, a “pathetically miniscule” percentage had been delivered. He went on to note the heavy rains a few days ago, which killed survivors of Haiti’s earthquake. The Caribbean Community (CARICOM) had sounded alarms for months about the rainy season. “To survive an earthquake, only to be killed by rain, is an unfathomable tragedy,” he said, calling the avoidable deaths a “stain” on the collective conscience of this body. “Talk is cheap, even when it is in the heady talk of billions of dollars.”

Finally, he stressed that “We must cede no ground to the creeping encroachment of non-inclusive, non-transparent, non-representative groupings.” He did not doubt the G-20 had a useful and essential role to play. However the logic faded in the face of a crisis that spread rapidly and comprehensively to other parts of the globe. His country and 172 other Member States had not been admitted to the meeting in Pittsburgh. Hence, those economies “waited anxiously on the doorstep of the G-20 for signals and policy shifts that affect our current survival”. The Caribbean was devastatingly affected by the crisis, even though it played no role in creating it. “Yet we have been forced to rely on friendly nations as interlocutors on our behalf,” he said, and added that the deliberations of the G-20 would have benefited from his country’s perspective.