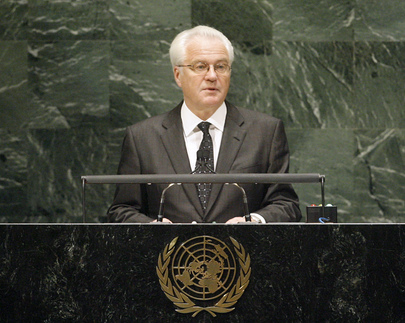 VITALY I. CHURKIN ( Russian Federation) said that amid numerous challenges facing mankind, it was encouraging that a unifying platform for collective action was taking shape under the central role of the United Nations. The Security Council was a key instrument for peace and security, and its high-level meeting on 23 September reaffirmed the 15-member body’s intention to enhance its efficiency. It was also encouraging the United Nations was working to improve quality of peacekeeping operations on a truly collective basis. The treaty signed this year by the Presidents of the Russian Federation and the United States to reduce and limit nuclear weapons was a result of improved relations between their countries, and the Russian Federation hoped the process of nuclear disarmament would be followed by all nations.

The search must continue for an effective solution to the Iranian nuclear problem on the basis of the nuclear Non-Proliferation Treaty and international law, through constructive dialogue between Tehran and the six negotiating countries. Sanctions sent a signal to Iran about the need for full cooperation with the International Atomic Energy Agency (IAEA) and gave impetus to the negotiating process. Unilateral sanctions on countries such as Cuba, however, undermined the very foundation of joint efforts, ran counter to international law and must be ended. On the Middle East, he said during resumed direct Palestinian-Israeli talks the parties must demonstrate political will and do their utmost for their success. Israel’s decision not to extend the moratorium on its settlement activities raised serious concern. The Russian Federation aimed to advance Middle East peace with its proposal for an international conference on the region in Moscow.

The future of Afghanistan must be determined by the Afghan people themselves, but the international community must continue assistance with the United Nations playing an important role. International cooperation on Afghanistan’s drug problem needed to be increased to obtain lasting stability in the country and the region, he said. As the referendum on self-determination of South Sudan was getting closer, parties to the Comprehensive Peace Agreement must redouble efforts to overcome their divisions. The process towards settlement of the Darfur issue also needed new dynamics, as the stability of Sudan and Africa were at stake. On Somalia, he called for a more resolute pursuit of a political process, stronger peacekeeping assistance and counter-piracy efforts. Global problems, including achieving the Millennium Development Goals, could not be achieved without engaging the enormous potential of the United Nations.