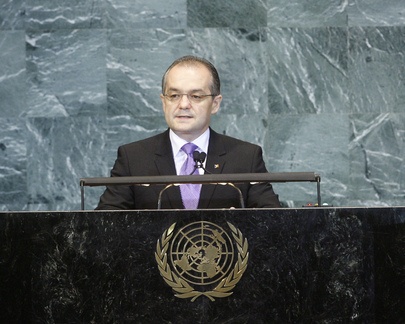 EMIL BOC, Prime Minister of Romania, stressed the importance of tackling climate change. Negotiations in Cancun and thereafter, and building upon the Copenhagen Accord, must pave the way for timely adoption of a comprehensive, legally binding post-Kyoto agreement. As President of the Commission on Sustainable Development, Romania would strongly support international efforts towards that goal. Romania knew very well from its own past the negative impact on long-term development prospects of the lack of genuine democracy, human rights and freedoms. Democracy began with a basic step: free and fair elections. Electoral processes could be improved and States must be ready to accept that. Out-of-country voting was sensitive and challenging. Romania worked in cooperation with the United Nations Division for Electoral Assistance, European institutions and the Community of Democracies to develop knowledge and codify best practices in that field. He hoped that the results of Romania’s first seminar on that topic this past summer would be shared widely.

Over the past few years, Romania had played an active role in various international forums to combat racism, radicalism and xenophobia, he said. It was an active proponent of diversity and multiculturalism, as well as intercultural and religious dialogue, in the framework of the Alliance of Civilizations. In Europe, there had been much talk lately about the Roma population on issues of discrimination, social inclusion and safeguarding fundamental rights and freedoms. The European Union had proven capacity to adapt and ultimately solve such issues.

Conflict prevention and peacebuilding were priorities in today’s world, he said, and he noted that Romania had substantially contributed to United Nations civilian and military missions and had started to develop dedicated civilian capacities in stabilization and post-conflict reconstruction. A few weeks ago, Bucharest had hosted an international conference to officially open the Romanian Training Centre for Post-Conflict Resolution.

The international community must reaffirm its determination to fulfil the goals of the United Nations Assistance Mission in Afghanistan (UNAMA), he said, expressing concern over the attacks that tried to derail the recent legislative elections there. He firmly supported the continued involvement of the United Nations and the international community in reconstructing Iraq. Romania continued to uphold the United Nations mandate in Kosovo. While respecting the International Court of Justice’s advisory opinion on Kosovo, Romania believed that it did not examine the core issue — the legality of the creation of an allegedly new State. Unilateral secession was not possible under international law, and Romania did not recognize Kosovo’s unilateral declaration of independence.

Romania remained concerned with protracted conflicts in the extended Black Sea area and South Caucasus, he said. While solutions to those conflicts continued to be explored in the agreed formats, they must be monitored by the larger United Nations membership. Georgia was a top Romanian priority, and the United Nations must continue to play an important role. Full implementation of the mandate of the European Union monitoring mission, by deploying it throughout Georgia, was conducive to a lasting solution there. He supported the Middle East peace process and the adoption of the final document of the May Review of the Treaty on the Non-Proliferation of Nuclear Weapons. He welcomed creation of UN Women.