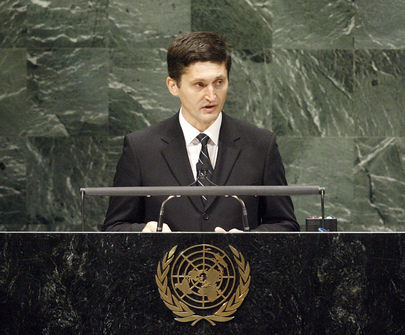 ALEXANDRU CUJBA (Republic of Moldova) opened by saying the general debate was being held on the eve of the sixty-fifth anniversary of the entry into force of the United Nations Charter, which had laid the foundations of the Organization. During the past six decades, the world body had been tested by numerous challenges, and today it continued to prove its relevance, importance and vision. Continuing, he said the Republic of Moldova was committed to the accomplishment of the Millennium Development Goals by 2015, and noted that the United Nations agenda reflected modern realities, such as human rights and democracy, welfare and sustainable development, climate change, peace and security, and United Nations reform.

Development of legal and institutional frameworks in the area of human rights was amongst his Government’s main activities. Membership in the Human Rights Council, attained for the first time in May 2010, was in line with the irreversible course of the Republic of Moldova towards fundamental freedoms. In addition, Moldova was a State party to nearly all the multilateral treaties in the field of human rights within the United Nations system. He expressed solidarity with appeals articulated to invest more in advancement of women, and was confident the newly established UN Women would contribute to the consolidation of international efforts in achieving the goals of equality and advancement for all women.

He stressed the importance of cooperation in enhancing international security, disarmament and non-proliferation, and counteracting international terrorism. He noted significant progress in disarmament and non-proliferation, evidenced by the Nuclear Summit and Treaty on the Non-Proliferation of Nuclear Weapons Review Conference. Of primary importance was the enhancement of international cooperation in the field of conflict settlement, with a view to exclude future occurrences or escalation of crisis situations, which jeopardized the sovereignty of States. At the same time, the Republic of Moldova faced security challenges generated by separatism in the Transnistrian region. Some 18 years since the ceasefire agreement had been signed, the country remained artificially divided. As a result, democratic governance and human rights were not being implemented in that territory and the population “lived in a legal vacuum with no clear future”. At the same time, it was obvious that there were objective premises to resolve the problem. He advocated for dialogue, openness and trust. “Our main goal is to provide the much needed support to the population and businesses in the region, including by the means of international projects and programs,” he said.