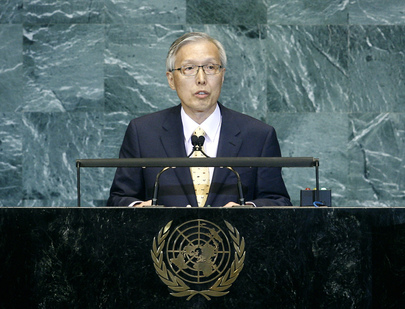 SHIN KAK-SOO, Acting Minister of Foreign Affairs and Trade of the Republic of Korea, emphasized the importance of maternal and child health in achieving the Millennium Development Goals, and stated that the nation had joined the G-8 Muskoka Initiative for Maternal, Newborn and Child Health in this regard.  Further, the Republic of Korea fully supported the Secretary-General’s pursuit of the Global Strategy for Women’s and Children’s Health.  The success in achieving the Goals would depend on the honouring of development commitments, he stated.  Thus, the Republic of Korea had embarked on a midterm plan to triple its official development assistance (ODA) over the next 5 years to .25 per cent of gross national income.  The nation was also seeking to improve the quality of its development assistance through the reform of its official development assistance system.  A basic law on ODA had already been enacted as the first step and ODA policy would reflect the actual needs of recipient nations.

As regarded the upcoming G-20 Summit in Seoul, he noted that the shared goal of the G-20 and the United Nations was to narrow down the persistent development gap.  Accordingly, development would be tabled as a “crucial new item” with focus given to building capacity in the developing world.  Global financial safety nets would also be new on the agenda and the reform of international financial institutions and regulations would be “central” to discussions.  Green growth, he noted, lay at the heart of sustainable development.  In this regard, the nation had set a voluntary reduction target of 30 per cent against business-as-usual level by 2020 and had also launched the Global Green Growth Institute.

In light of the increasing demand and complexity of peacekeeping operations, he stated that “all stakeholders, including troop-contributing countries and financial contributors, should focus on close coordination and cooperation”.  The newly enacted, Law on Participation in United Nations Peace-Keeping Operations would further enhance Korea’s capacity to respond on this front.  But “one of the most urgent challenges of today” was the proliferation of weapons of mass destruction.  In this context, the Republic of Korea welcomed the adoption of the final document at the 2010 NPT Review Conference and looked forward to follow-up discussions on nuclear security at the second Nuclear Security Summit to be held in the Republic of Korea in 2012.

In light of increasingly diverse and interconnected challenges, the United Nations, he said, should heighten its reform efforts aimed at broadening its operational response capacity.  He commended the launch of UN Women in this regard, noting that it would greatly enhance system-wide coherence.  Furthermore, it was “crucial” that the Security Council be more representative, effective and accountable.