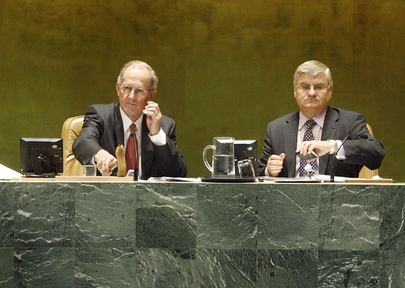 In closing remarks, Assembly President Joseph Deiss, of Switzerland, said he had been struck by the convergence of concerns expressed not only from the rostrum but during bilateral meetings held on the sidelines of debate. “If our concerns are shared, why then have so many tragic situations lasted for so long?” he asked. He wondered whether delegates had taken the time to talk with one another or been merely content with repeating the same issues year after year.

Summarizing key messages delivered throughout the week, Mr. Deiss said the high-level plenary on the Millennium Development Goals had laid bare the need to follow words with actions so as to meet the expectations of millions living in poverty. Situations in the Middle East, Sudan and the Balkans were a reminder that the United Nations still had a long way to go in fulfilling its primary duty of maintaining peace and security. Speaker after speaker, he said, had dwelt on the risks associated with climate change, including the loss of biodiversity, and reiterated the need for more efforts to address those challenges head on.

As for global governance, the theme of the general debate, he said the number of Heads of State and Government in attendance testified to the importance attached to that issue. To improve cooperation between the United Nations and other players in that sphere, he planned to launch an informal dialogue with the Secretary-General and the prospective Group of 20 (G-20) host country to take place before and after those summits. There was also a possibility for an informal debate, during the second half of his term, to explore routes towards a system that was more inclusive and open. Many leaders had cited a lack of leadership and need for major reform as areas of concern.

“Are we ready to strengthen the Organization today?” he asked. Were States not already recreating the United Nations outside its walls by multiplying the number of decision-making forums? Essential reforms currently under way, notably for the Assembly and the Security Council, must move forward. It was clearly up to Member States whether the United Nations would prove a strong tool truly able to work for the common good. Breakthroughs would require a great deal of creativity.