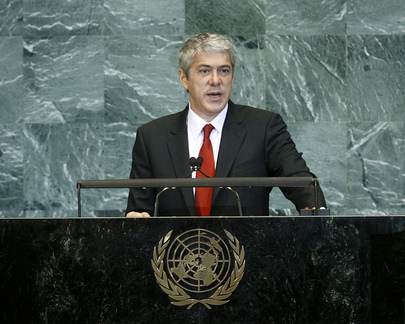 JOSÉ SOCRATES, Prime Minister of Portugal, said his country was guided by the principles of national independence, respect for human rights, equality between States and peaceful conflict resolution, all of which were inscribed in the Constitution.  Indeed, avoiding war was among the noblest of objectives and the United Nations Charter defined the way States should act to prevent or remove threats to peace.  A contributor to United Nations peacekeeping operations, Portugal was present in places as diverse as Afghanistan, Southern Lebanon, the Western Balkans and the Democratic Republic of the Congo.

The coming year, he said, would be critical to the Middle East peace process and he welcomed renewed negotiations between Israel and Palestinian authorities with a view to realizing a two-State solution.  In Afghanistan, the results of the Kabul Conference would need to be complemented at the NATO summit in Lisbon.  International peace and security, however, required effective multilateralism, and the United Nations must be “the central and dynamic platform” to fight every form of terrorism.  Thus, any reforms must reinforce - not weaken - the goals that presided over its creation.  The Organization’s universalism must be strengthened, as it was the sole body where all States, including small and middle-sized countries, had their own say in solving global problems.

Establishment of the Peacebuilding Commission - an idea put forward by Portugal – had marked a significant step in the reform process.  He urged enlarging the Security Council into a more representative and transparent body, saying it was illogical that Brazil and India still were not permanent members.  Africa also must be considered for permanent membership.  As for the Millennium Development Goals, he said Portugal was firmly committed to applying the agreed political vision to reach the objectives over the next five years.  In that context, he called for more participation of developing countries and regional groupings in debates about reforming global financial institutions.

On climate change, he said Portugal was already producing 45 per cent of its electricity from renewable sources and working to achieve 60 per cent.  It ranked second in the use of renewables in its energy mix and had shared such knowledge with others in adaptation and mitigation activities within the Copenhagen framework.  Urgent measures were needed to mitigate the vulnerability of least developed countries and small island developing States to climate change.  Finally, he said Portugal’s conduct in the United Nations was rooted in its capacity for open dialogue.  It sought active participation in all bodies of rotational composition, especially the Security Council.