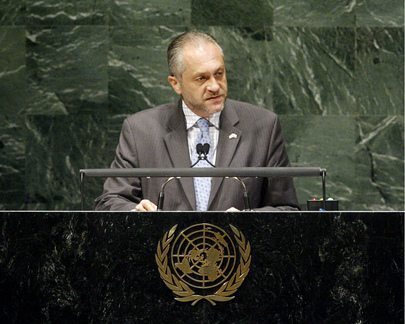 WITOLD SOBKÓW ( Poland) said his country had always been a firm supporter of the United Nations and multilateralism as a guiding principle in its participation in the European Union. However, in light of heightened expectations and criticism, it was raising the issue of reforming the Security Council, while preserving that body’s cohesion and decision-making processes. “We favour an additional non-permanent seat for the Eastern European Group. We also find interesting and worth discussing an idea of the European Union representation,” he said.

Noting that the latest world economic crisis demonstrated the need for a globally coordinated economic and financial policy, which was being debated by the General Assembly’s Second Committee (Economic and Financial) and other United Nations-related organizations, he added that Poland continued to expect the Organization to be the key forum for multilateral debate on issues relating to the crisis. The world body must also remain the appropriate forum to address global issues of security and to achieve a wider consensus on strategic peacekeeping aspects. Additionally, Poland applauded the Secretary-General’s efforts towards disarmament, calling on all States to redouble their efforts to invigorate the Conference on Disarmament as a platform for non-proliferation negotiations, including regarding the reduction of sub-strategic nuclear weapons.

Discussing economic issues, as well as the costs and security of the energy sector, he said: “We need a shift in our thinking about the North-South dichotomy to allow the international community to move effectively forward. Allowing ourselves to be defined by our differences is a recipe for disaster.” He noted that economic activities within the United Nations were scattered between many institutions, leading to overlapping Powers, but suggested that the Organization’s role might be to coordinate objectives and ensure coherence among the activities of major international organizations. He also reiterated Poland’s support for implementing the Millennium Development Goals and the country’s active involvement in promoting global development cooperation.