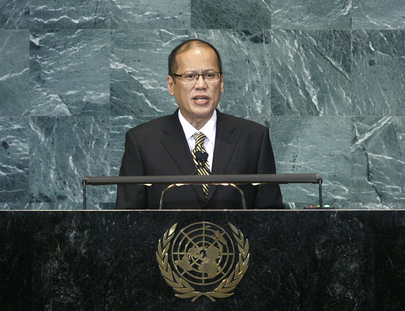 BENIGNO S. AQUINO III, President of the Philippines, noted that each leader appearing before the Assembly represented not just the well-being of his or her people, but was also called upon to be responsive members of the “community of nations”. Due to the nature of globalization, the problem of one country posed a problem to another, and thus any solution could not be developed in a vacuum. It was clear, then, for “humanity to progress, all nations must progress as one”.

Quoting one of his predecessors, he said, “Those who have less in life should have more in law.” Thus, a compassionate response to those in need was humane and necessary. The struggle to combat inequality and the gap between the powerful and powerless were challenges still to be resolved. That was evident in the area of climate change, where man-induced climatic conditions most impacted those who “did little to cause it”. He called for support for the countries most vulnerable to climate change in building climate-resilient communities, reconstruction and disaster risk-reduction, to name a few, and for those major economies to significantly reduce global greenhouse gas emissions.

Continuing, he said that achieving the Millennium Development Goals would only happen when national resolve was supported by bilateral, regional and multilateral cooperation. A strengthened regulatory system would only be possible under Governments that allowed private enterprise while ensuring social responsibilities. His own country had made a pledge in that regard: “to channel the gains we might reap from public-private partnership into social services, like those in health, education and poverty alleviation”. In balancing the responsibility to one’s own people and to their regions and the global community, he observed a rethinking of traditional methods and concepts, and a shift of focus within the global system, where no one would be left behind.

While the Philippines were recipients of aid and support, his country would not stay entirely dependent on “the largess of the developed world”, but, in fact, would be active in its own development through its efforts in the Group of 77 and initiatives to enhance South-South cooperation and collective economic interests, he said. His country’s history showed that nothing was impossible when the people united as a “people power”, and he expressed hope that, through dialogue, solidarity and communal responsibility, a “people power” towards equitable progress would be achieved.