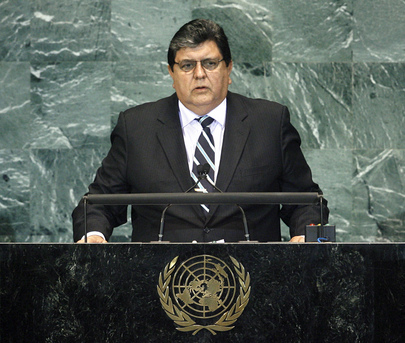 Alan García Pérez, President of Peru, said today there were enormous economic and climate change challenges that knew no borders. For Latin America, the last decade had brought the challenge of choosing between two different models of economic and social development. The social democracy model recognized the market, attracted global investment by clear rules, was open to the world, and aimed to grow through fairly negotiated free trade treaties and the rights of workers. The antithesis of that model was advocated by countries with great natural resources, who objected to global realities, looking inwards toward growth, and used subsidies and wages in the public sector instead of promoting infrastructure and securing the future of the people. That second path avoided reality and did nothing to create the jobs people wanted. Poverty alleviation and job creation required global integration.

Peru had opted for a realistic approach, he said. It was now a more stable, independent and egalitarian country, and better able to help defend global freedom, democracy and economic stability. In the last five years, Peru’s economy grew 6.5 per cent annually. Employment increased and poverty fell. This year the economy would grow 8 per cent. Public spending on infrastructure, health and education was made a priority. Peru would reach its goal of cutting the poverty rate to 30 per cent in the next year, and it expected that rate to fall to 10 per cent in 2021. Peru had already met many of the millennium targets and it would continue to work to reduce poverty, and improve nutrition, health, education and literacy. The infant mortality rate was cut by one third in the last five years. Currency reserves, now at $42 billion, had tripled in the last five years.

Faced with the same challenges, some other countries had chosen the second path of State ownership, Government administration of trade and confrontation, he said. But they could not boast similarly positive results. Peru had chosen “the right course” in history. The economic crisis showed that favouring the free market did not mean the absence of Government. Peru had doubled its exports in four years, tripled its reserves and signed trade agreements with many nations, giving it the necessary basis to spur growth and create jobs.

The proliferation of nuclear arms must be stopped at any price, he said, as should conventional weapons. Peru had pushed for a South American protocol on peace, security and cooperation to achieve lasting peace and the reduction of arms expenditures. Enormous global spending on military expenditures was shameful when millions of people were so poor. Multilateral loan organizations that had lending clauses regarding the environment should also have them on weapons. Regional integration was essential and the sharing of information was a key to achieving it. Ecuador and Peru, only 15 years ago divided by war, had since taken a quantum leap forward towards integration and development. He commended the role of the G-20 in international cooperation, but said everyone must coordinate to combat drugs, terrorism and other global concerns.

Peru was at high risk for climate change, but it was strongly placed to mitigate it, he said. He called on the richest nations to fulfil their obligations to mitigate climate change. Peru was working to develop a clean, sustainable, low-carbon economy and it aimed to have alternative energy account for at least 40 per cent of nation’s energy consumption. The globalization of capital, services and products went hand in hand with the free movement of people. Migration was a tool for development. He condemned any anti-migrant provision in Arizona and similar legislation elsewhere, as well as any type of xenophobia. It was paradoxical to countries led by the children of migrants who were condemning migration. The best way to avoid unbridled migration was by unhampered free trade.