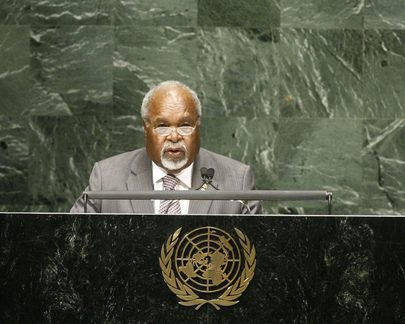 MICHAEL T. SOMARE, Prime Minister of Papua New Guinea, said amid efforts to forge ahead to achieve the Millennium Development Goals, his country was reaching for its goals already. Papua New Guinea had adapted and localized the Millennium Goals by establishing 15 targets and 67 indicators within its medium-term development strategy for the 2005-2010 period. He urged donor partners to abide by the principles of the Paris Declaration on Aid Effectiveness and the Accra Agenda for Action. Developed countries should raise their ODA to 0.7 per cent of the gross national income. He was disappointed that the eighth “MDG on Global Partnership for Development” appeared to attract little serious interest from developed countries. In addition, the Doha Development Round remained an unfinished affair, he said.

Turning to security, he said the world was no safer today than when the United Nations was formed, with religious and ethnic tensions rippling across parts of Africa, Latin America and Eastern Europe. The international community must do more to address those issues. Nuclear weapons still existed, and non-proliferation efforts should be strengthened.

Another scourge was climate change, whose consequences taxed budgetary resources and undermined development plans, he said, stressing his country’s commitment to reducing emissions through its programme of Reduced Emissions from Deforestation and Forest Degradation, more commonly known as REDD plus, and through its adoption of an action plan for climate-compatible development.

Improving the efficiency of the United Nations must also be addressed, he said, commending the United Nations Secretary-General for the ongoing administrative and institutional reforms. Security Council expansion was logical and would allow for representation from certain additional developed and developing countries alike. He supported Germany and Japan’s inclusion as permanent members in any expanded Security Council.