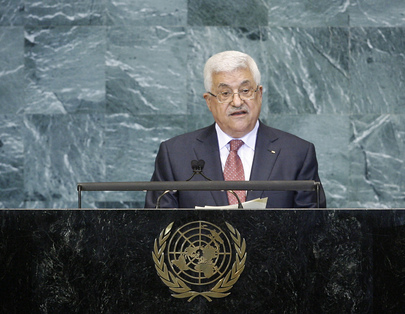 MAHMOUD ABBAS, President of the Palestinian National Authority, said the Palestinian people, in particular, and the region, the Middle East, were facing dangerous problems that continued to push them into the corner of violence and conflict, wasting chance after chance to seriously address the issues faced by people of the region and to attain comprehensive and genuine solutions.  In his view, that was the result of the “mentality of expansion and domination” that still controlled the ideology and policies of Israel, which continued to occupy Palestinian land and which had made non-compliance with resolutions of international legitimacy its prevailing policy.  He believed Israel’s “disrespect” had rendered those resolutions ineffective, denigrating the United Nations’ credibility and deepening the predominant view of a policy of double standards, especially with regard to the cause of the Palestinian people, and that Israel was a State above the law, as it had been flouting all those resolutions.

He further called on Israel to cease its “illegal” measures and policies of excavations, demolitions of homes and deportations and revocations of the residency rights of the population of the ancient city of Jerusalem.  That was also the case with regard to the situation in the Gaza Strip, which he said had been subjected to an unjust and unprecedented land, air and sea blockade in violation of international and United Nations resolutions, in addition to being subjected to Israeli military aggression.  He welcomed the efforts of the international independent fact-finding mission established by the Human Rights Council over the Israeli attack on the “Freedom Flotilla” and also welcomed the mission’s conclusions and looked forward to the submission by the United Nations Panel of Inquiry established by the Secretary-General of its findings to the Security Council.  In addition to all that was the fact that there remained thousands of Palestinian prisoners in Israeli jails and detention centres.  “We cannot reach a peace agreement that does not liberate all of them from their chains and cells,” he added.

Continuing, he said that despite the historic injustice that had been inflicted upon the Palestinian people, their desire to achieve a just peace that guaranteed the achievement of their national rights in freedom and independence had not and would not diminish.  “Our people aspire to live in security, peace and stability on their Palestinian national soil to build the life and future of our generations,” he said.  The Palestinian people were willing and ready to reach a comprehensive, just and lasting peace settlement, based on righteousness and justice and on the resolutions of international legitimacy, and which led to the withdrawal of Israel from all occupied Arab and Palestinian territories.  He said, based on a genuine desire to realize a comprehensive, just and lasting peace in the region, the Palestinian Authority had decided to enter into what he called “final status negotiations”, and pledged to exert every effort to reach an agreement for Palestinian-Israeli peace within one year, in accordance with international legitimacy, the Arab Peace Initiative, the road map and the vision of the two-State solution.

He urged the international community to draw lessons from the reasons for the failure of the political process and the inability to reach its goals in the past, noting that restoring the credibility of the peace process mainly required compelling Israel to comply with its obligations and commitments.  The Palestinian demand for the cessation of settlement activities, the lifting of the siege and an end to all other illegal Israeli policies and practices did not constitute arbitrary pre-conditions in the peace process, but were consistent with implementation of obligations and previous commitments, compliance with which had been repeatedly reaffirmed in all resolutions adopted since the very start of the political process.  Israel’s implementation of those obligations and commitments would lead to the creation of the necessary environment for the success of the negotiations and would give credibility to the pledge to implement the final agreement.  To that end, Israel had to choose between peace and the continuation of settlements.

He further stated that rectifying the path of the political process could only be achieved when the international community itself assumed the main responsibility for ending the Israeli occupation and ensuring the Palestinian people’s right to self-determination in their independent, sovereign State on the basis of the 4 June 1967 borders, with East Jerusalem as its capital and a just and agreed solution for the plight of the Palestinian refugees.  The Palestinian people were also determined to restore national unity between the two parts of their homeland and would spare no effort to end the division resulting from the coup against Palestinian legitimacy.  Concluding, he expressed thanks for United States President Barack Obama’s affirmation in his address to the General Assembly of the two-State solution and the necessity for a freeze of settlement activities, as well as his hope for the establishment of the independent State of Palestine and its full membership in the United Nations.