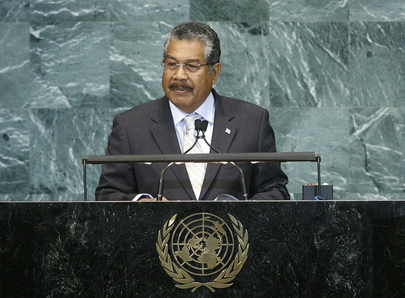 JOHNSON TORIBIONG, President of Palau, called his country’s national story one of “achievement and success”. As the last country to emerge from the United Nations Trusteeship, its Constitution incorporated the rights and freedoms enshrined in the Universal Declaration of Human Rights. Palau’s strong partnership with the United States had helped its efforts towards self-sufficiency. The young country retained a strong role in the international community and had deployed peacekeepers to Darfur, Timor-Leste and the Solomon Islands.

With its traditions as its bedrock, Palau had achieved all of its Millennium Goals, most notably, in the areas of universal literacy, gender equality, maternal health and access to education. Poverty, hunger and infant mortality had also been eliminated, he said. Regarding biodiversity, Palau and its Pacific neighbours had formed the Pacific Oceanscape, a programme that addressed the “fight for our oceans”. Its Shark Sanctuary programme, introduced last year, had helped to end unsustainable and wasteful shark finning. “We cannot accept the loss of 73 million sharks a year for a bowl of soup,” he said, noting that effort was imperative to ensuring the viability of tuna stock and other marine life.

Turning to climate change, he said the adoption of Assembly resolution 63/21 was a landmark occasion and Pacific small island developing States called for action on that text. As the world’s first nuclear-free Constitution, his country supported the efforts related to disarmament and prevention of proliferation of nuclear weapons. “We long for the day when the world is free of nuclear weapons,” he said, and welcomed the effort to add the Middle East to the list of nuclear-weapon-free zones.

On United Nations reform, he said Palau was hopeful that progress could be made this year on reshaping the Security Council. His Government’s position on that issue had been clearly stated in the past, but he reiterated that, if the Organization was to remain relevant, the Security Council’s make-up must reflect the diversity of the United Nations wider membership. His delegation strongly supported expanding the Council, particularly with the addition of Japan as a permanent member.

In closing, he stressed that Palau “still feels pain from the colonial days”, noting damaged resources and the explosives scattered on its land that still posed dangers. Humanitarian grants from the international community, he said, would provide “a relief that will heal the gaping wounds of our island and bring justice to our people”.