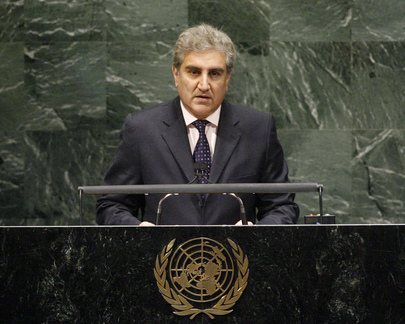 MAKHDOOM SHAH MEHMOOD QURESHI, Minister for Foreign Affairs of Pakistan, said that the recent flash floods in his country — the worst in living memory — had seen precious lives lost, millions of acres of crops washed away, and livelihoods lost. Pakistan was grateful to the United Nations, its development partners and others for supporting rescue and relief efforts. The Government was determined to rebuild a better and vibrant Pakistan in a transparent and accountable manner; “the resilience of our people should enable us to achieve this objective”.

Pakistan supported a comprehensive reform of the Security Council to make it more representative, equitable, transparent and accountable, guided by the principles of equality and democracy, he said. A consensus solution should correspond with the interests of all Member States, particularly small and medium States, developing countries and Africa. On terrorism, Pakistan had achieved important successes, but at a heavy cost, with more than 20,000 innocent civilians falling victim to terrorism, more than 2,500 members of the security forces killed and material loses of nearly $50 billion. Pakistan would persist in its efforts to eliminate terrorism, but it was essential to address the root causes of terrorism, often found in poverty, deprivation, injustices and oppression. Terrorism recognized no borders, nor did it have a religion or creed. “We cannot accept the stereotyping of Muslims as terrorists”; terrorism was a complete antithesis to Islam’s outlook and values.

Jammu and Kashmir was among the oldest disputes on the agenda of the United Nations, he said. It was a dispute about the right of self-determination by the Kashmiri people through a free, fair and impartial plebiscite under United Nations auspices. He strongly condemned the brutality of the past two months, in which more than 100 Kashmiris had been killed by Indian security forces. Pakistan was willing to engage India in a comprehensive dialogue to normalize bilateral relations and amicably resolve all outstanding issues, including Jammu and Kashmir. A peaceful resolution of the Kashmir dispute would help create durable peace and stability in South Asia. On Afghanistan, he said Pakistan had been hosting the largest concentration of refugees anywhere for more than 30 years; it continued to host its Afghan brothers as a moral and humanitarian duty. No country had suffered more than Pakistan from the consequences of the conflict in Afghanistan. “The time has come to turn Afghanistan from the centre stage of proxy wars, interference and confrontation into a hub for international cooperation and development.” Restoring societal equilibrium was an Afghan responsibility that could not be imposed externally. Pakistan supported all efforts at national reconciliation that was Afghan-owned and Afghan-led.

Disarmament and non-proliferation should be pursued in an equitable manner, the Foreign Minister said. Pakistan has consistently pursued a policy of conventional and nuclear restraint, along with conflict resolution in South Asia; a strategic restraint regime would be an important way to promote regional peace, stability and security. Pakistan was low on the list of greenhouse gas emitters, yet climate change was causing irrevocable damage, becoming a reality for 170 million Pakistanis. Extreme vulnerability to climate change complicated the scenario for Pakistan’s post-flood reconstruction. It was hoped that the United Nations Framework Convention on Climate Change Conference in Cancun would define a pathway to agreement at an early date.

The representative of Pakistan said he was responding to the incorrect assessments of the Minister of Foreign Affairs of India, who had made a “self-serving claim” that Jammu and Kashmir was part of India.  Nothing was farther from the truth.  The disputed territory was on the agenda of the United Nations, which had passed resolutions to that effect.  The first Prime Minster of India, Nehru, had also made commitments — reaffirmation of which Pakistan welcomed — which noted that Kashmir was not the property of either India or Pakistan, but belonged to the Kashmiri people.

He went on to say that India failed to fulfil its commitments, but still had the audacity not only to claim democratic credentials, but also to aspire to be a permanent member of the Security Council.  Pakistan had only echoed non-governmental organizations and the media as to the ongoing situation concerning human rights in India, as well as Kashmir.  He quoted a number of statements made by the international media and civil society groups expressing concern over the loss of life in Kashmir and calling for an immediate end to violence.  For example, Amnesty International had called on Indian authorities to take steps and respect the right to life, while Human Rights Watch said that Kashmiris had been left without any justice.  Despite brute force by security forces, Kashmiris did not support the occupation of their land and persisted in the right for self determination.

India has maligned Pakistan on terrorism in order to hide its own behaviour, he continued.  Pakistan’s role in fighting terrorism has been stated by the international community, and security forces in Pakistan continued to try to make the world safer, although countries continued to provide weapons and money to create havoc.  The Indian Government was advised to take stock of its own policies and conduct, including supporting terrorism.  He said India was also a country that created and nurtured terrorist organizations that conducted suicide bombings in the region.  India’s policies resulted in systematic human rights abuses, and the killing and maiming of Kashmiris.  Pakistan remained committed to peaceful dialogue with India, including about the Kashmire dispute, which would bring lasting peace not only between Pakistan and India, but beyond their borders. Addressing human rights for the people of Kashmir was the first step.

Returning to the floor, the representative of Pakistan said that his country did not interfere in internal affairs of other countries, but that the issue of Jammu and Kashmir was not an internal dispute.  Pakistan had the right to provide support to the people of Kashmir and their right self-determination.  The Indian representative’s reference justifying occupation was not only rejected by the people of Kashmir, but by the Security Council.  In 1995, that body had concluded that the people of Jammu and Kashmir had the right to self-determination.

The ongoing indigenous peaceful movement for freedom in Kashmir had proven that, despite facing repression and human rights violations by security forces, the people of Kashmir refused to accept any solution except the right to self-determination.  Pakistan was aware of those who took cover behind democracy and tried to stand on high moral ground, he said, noting that India’s interests would be better served if it used “ancient wisdom” at home.  Kashmir should not be a tool of State politics, as the future of a people was at stake.  Pakistan remained committed to a peaceful resolution of issues with India, including Kashmir, through dialogue, Pakistan’s representative said, expressing hope that the two sides could move from conflict management to conflict resolution.