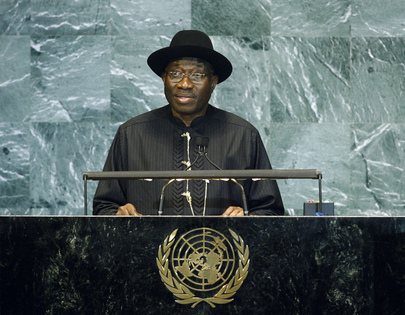 GOODLUCK EBELE JONATHAN, President of Nigeria, had been sworn in on 6 May. He noted the country’s participation in United Nations peacekeeping missions just seven days after its independence as the “direct and deliberate fulfilment” of the international role it had set for itself. The country still faced daunting challenges. Progress on reduction of maternal and child mortality was relatively slow and weakness in the primary health-care sector, combined with limited referral institutions, remained crucial challenges. That said, Nigeria had recorded remarkable progress in the provision of universal basic education and was harmonizing baseline data for proper monitoring and evaluation of all Millennium Development Goal projects.

“The smooth succession of power since Nigeria’s return to democratic rule in 1999, including my own ascension to the presidency”, he stated, was evidence of commitment of all stakeholder’s to democratic governance. In this context, the country would hold free, fair and credible elections and strengthen institutional structures for combating corruption and financial crimes, including reforming the financial sector to make it more accountable and transparent. In support of the nation’s commitment to the global efforts against terrorism, he was confident that two bills — the Anti-Terrorism Bill and the Anti-Money-Laundering Bill — would be passed into law before the end of the legislative year.

He shared the vision of other leaders of a world free of nuclear weapons and noted Nigeria’s support and active participation in the adoption of the Pelindaba Treaty on an African nuclear-weapon-free zone as evidence of its commitment to that vision. He also highlighted the dangers posed by small arms and light weapons, which had destabilized the continent, fuelled and prolonged conflicts, and obstructed relief programmes.

Furthermore, those weapons had undermined peace initiatives; increased human rights abuses; hampered development; and served to foster a culture of organized crime and violence. Despite their extensive impact, commensurate attention had not been accorded to addressing that issue. He called upon the United Nations to take firm action by adopting an Arms Trade Treaty, adding that an estimated 100 million of these weapons were in sub-Sahara Africa alone and there were no global treaties or legally binding instruments to address this challenge.

“I urge the United Nations to devote renewed attention to preventive diplomacy,” he stated, noting that the increasing financial burden of peacekeeping and high human cost of conflict underscored the importance of that request. As a major troop-contributing country for peacekeeping operations, Nigeria believed it was also essential that the rules of engagement be reviewed, among other things, to prevent high casualty rates.

Underlining the theme of the Assembly’s sixty-fifth session — reaffirming the central role of the United Nations in global governance — Nigeria urged the United Nations to quicken the pace of its reforms to better reflect current global realities and ensure genuine legitimacy. In particular, expansion of the Security Council would accord the Organization greater effectiveness. “The exclusion of Africa from the permanent membership category of the Security Council can no longer be justified”, he concluded.