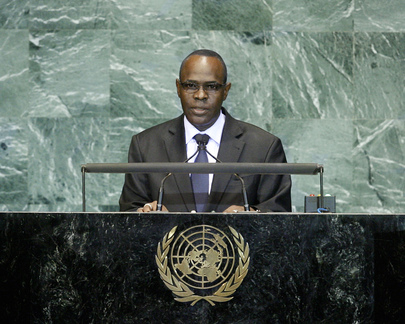 SALOU DJIBO, President of the Supreme Council for Restoration of Democracy of Niger, commended the Secretary-General for his many efforts. In February, political forces intervened in the face of an anti-constitutional drift and sparked a risk of the disintegration of national coherence. Those political forces were not an army hungry for power, but officers who desired to defend their country. A civil coup d’état had been undertaken and all laws of the republic were ignored. He noted that the arrival of the political forces was welcomed in national and international opinion. After stepping in, the Supreme Council for Restoration of Democracy immediately set a main goal to take all actions that could bring about peace in the country.

With that goal in mind, it had created a programme of governance that focused on the fight against corruption and the reconciliation of people of Niger. The National Independent Electoral Commission was set up, and a draft budget for seven planned elections from 31 October 2010 to 6 April 2011 was approved. Members of Government and the defence forces were ineligible for election during the transition period, he recalled. Ahead of the elections, he urgently appealed to the international community to continue assisting Niger and the Electoral Commission. Such assistance was crucial in order to achieve Niger’s goal of returning to constitutional life.

In hopes of ensuring free and transparent elections, he asked that the United Nations and all other interested institutions to observe the different elections. He had travelled to New York despite the conditions in his country to solemnly reaffirm that commitments made by Niger were in the advance stages of implementation. The transition authority fully upheld commitments made, and would surely complete implementation with the help of the international community. In May, a commission to combat economic and financial crime was set up along with a high authority for the reconciliation of democracy. Those efforts clearly reaffirmed Niger’s commitment to peace, security, good neighbourliness, and the rule of law in compliance with the United Nations Charter, the charter of the African Union, and other relevant legal documents.

Turning to the Millennium Goals, he recalled that progress had been “very uneven” in the international context. However, tangible progress had been made daily in many areas of concern. In Africa, many positive developments were recorded, including free and transparent elections in countries such as Sudan and Burundi. He hoped to see significant political progress made soon in other African countries. Moreover, he wished for the full success of the direct, bilateral negotiations between Israel and Palestine. In spite of efforts made to counter threats such as terrorism, drug trafficking and the proliferation of small arms and light weapons, national and regional authorities still faced challenges in stopping arms groups. “Our response must be concerted,” he declared.