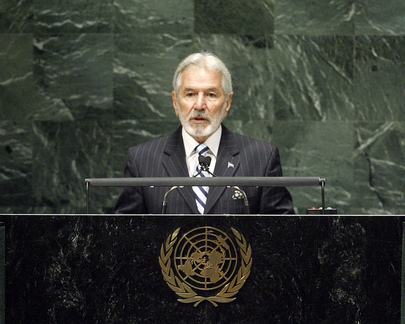 SAMUEL SANTOS LOPEZ, Minister of Foreign Affairs of Nicaragua, said the cause of the deep crises facing the world today was the present system of economic and political relations established by global capitalism and efforts to make that model the universal paradigm. Nicaragua knew first hand the pain of war and did not accept war as the obligatory language among peoples. The invasion of Iraq under false pretexts had not offered peace or stability, while the war in Afghanistan had become a dead-end for its occupiers. There was a close link between disarmament and development, and Nicaragua’s commitment to security included the promotion of human development, which was equal to sustainable development. Sadly, the global financial crisis had had little or no effect on global military spending.

For total disarmament, a climate of trust must be the only option for real and lasting world peace, he said. Nicaragua supported the inalienable right of parties to the Non-Proliferation Treaty to use nuclear energy for indiscriminate peaceful purposes, and because of that, demanded that Iran not be “cornered” because of that choice. “We generally need more decisive action which affirms multilateralism as the new paradigm,” he said, one that listened to the poor and really democratized the world order, beginning with the United Nations. Calling the Bolivarian Alliance of the Peoples of our Americas (ALBA) the vanguard of such change, he said Nicaragua joined Puerto Rico in upholding the banners of independence that had been violated, and Cuba, against which a criminal blockade had been set.

On climate change, recent Copenhagen talks “left us with a sense of having wasted our time”, he said, citing a lack of commitment by those who blocked solutions to address the critical state of Mother Earth. Nicaragua continued to promote its commitments on the principle of common but differentiated responsibilities. Those which had caused the damage should accept greater responsibility. As the first to have signed the Universal Declaration on the General Well-being of Mother Earth and Humanity, he urged others to sign that document. Moving on, he said States should not accept the imposition of economic models based on exploitation of riches. Nicaragua was pursuing an alternative model of economic sovereignty that would allow for recovering its capacity to determine its own development path. Each country’s development strategy was its own responsibility, and foreign aid must be in line with national plans, strategies and goals.

As for the “hair-raising” reality of 10.9 million children under age five who died in the developing world each year, he said hunger and malnutrition-related diseases caused 60 per cent of those deaths. The cost of those problems was estimated at $20 to $30 billion per year. “This intolerable situation has to stop,” he said. Transnational organized crime had become a permanent national security threat and he reiterated that his Government would combat all forms of terrorism whatever the source. Among the processes hampering change was the suppression of information with a view to perpetuating ignorance — “converting a smile into a smirk and words into noise,” he said. Social transformations were taking place in some countries as a result of revolutionary political forces, as was the case with the Frente Sandinista. Nicaragua proclaimed its right to live in peace, and combat poverty, hunger and malnutrition generated by imposition of an economic and political model alien to its own.