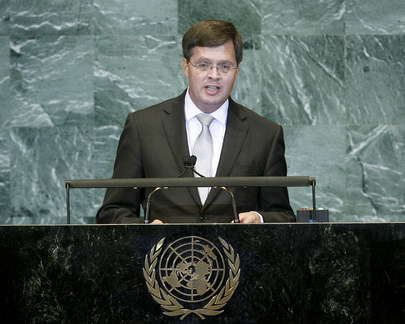 JAN PETER BALKENENDE, Prime Minister of the Netherlands, noted that the parallels were obvious between the major renovations of United Nations Headquarters now under way and the reforms needed to keep the Organization relevant after 65 years.  Global challenges had grown larger, including the multifaceted climate, energy, food and economic crises.  Ground had clearly been lost by the Organization; for example the Group of 20 (G-20), not the United Nations, was taking the lead in tackling the economic crisis.  Further, the world had not been able to unite behind tough decisions needed in climate change and the Millennium Development Goals were producing mixed results.

Yet, he had every faith that the United Nations could continue in the future to take its vital role as the world’s overarching governance organization.  Following the cold war, the international agenda was redefined with great speed and vigour, calling attention to climate change, social themes and gender issues, strengthening the international legal order, setting up peace missions and creating an ambitious development agenda.  Unfortunately, the United Nations greatest strength – inclusiveness - was also its greatest weakness, leading to sluggish decision-making and bureaucracy.  He was convinced, however, that effectiveness and decisiveness could be improved by putting all its machinery in the service of solving problems.  He pledged his county’s full commitment to making that happen.

In the area of human rights, he said that the United Nations fell short of enforcing the standards it had set.  It was unacceptable that women were stoned to death in 2010.  He urged the capacity of the human rights machinery be strengthened through a clear division of tasks between the Human Rights Council and the Assembly’s Third Committee (Social, Humanitarian and Cultural).

In addition, he said bold action was required to strengthen the international legal order, through international cooperation on investigation and prosecution, increasing compliance with relevant Security Council resolutions and pushing for as many countries as possible to sign the Rome Statute to the International Criminal Court and to conduct themselves accordingly.  In that regard, he maintained it was unacceptable that President Omer al-Bashir of Sudan, and others against whom warrants were outstanding, should be allowed to move freely in a country that was a party to the Court’s statute.

Finally, he said that, in matters of peace and security, the United Nations and the Security Council were best placed to provide legitimacy and resolve.  Unfortunately, the Council often had problems exercising those qualities.  For that reason, he supported reforming that 15-member body so that it reflected the geopolitical realities of today and not 1945.  The exact substance of those reforms was open to debate, but it was clear that the Council needed to be open to more countries to join the discussion and exert influence.  He added that countries that wanted such influence should realize that it entailed financial, political and moral obligations.