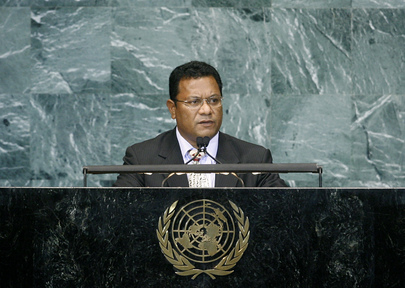 MARCUS STEPHEN, President of Nauru, said that, while they had gathered to reaffirm the role of the United Nations in global governance, the United Nations report card was mixed. Although the United Nations had brought attention to the vulnerabilities of the small island developing nations, it had not always succeeded in delivering concrete benefits. For this reason, Nauru had relied more on its domestic institutions and bilateral partners rather than multilateral governance solutions. “ Nauru turned a corner in 2005 when it adopted its National Sustainable Development Strategy,” he said, noting that the country now had a more transparent financial system and accountable Government, expanded public health programmes, new and refurbished schools, more reliable power usage, and improved travel and communications systems.

Because the remaining medium- and long-term objectives of the national development strategy complemented the Millennium Development Goals, he expressed hope that the United Nations could play a more significant role in the next phase of Comoros’ development and that the United Nations Joint Presence Office, which had opened in Nauru, could be more responsive to the country’s unique development challenges. The future of the people of Nauru depended on an effective United Nations system, but none more so than the youth. Economic crises and the explosion of global fuel and food, exacerbated by Nauru’s isolated location in the middle of the Pacific Ocean, had a lasting impact particularly on the youth who grew up during that time. Nauru had made investing in its youth a top priority and was on track to reach the Millennium Development Goals of universal primary education by 2015, despite a shortage of quality teachers.

Nauru’s health sector, which he named as another area fundamental to the well-being of its youth, had also made gains in curative diseases and preventative health programmes. However, approximately 75 per cent of people in the Pacific suffered from non-communicable diseases, so investments in public health needed to be accompanied by improved food security. To also create a growing economy in which the youth could further deploy its skills, Nauru needed to look to its development partners and multilateral institutions for assistance in building its basic infrastructure and re-establishing its banking and financial services.

He also called for the creation of a formal “SIDS” category within the United Nations system, which would make the Organization more responsive to the particular needs of small islands and lead to sustainable development. Underlining the environmental crisis and threat of climate change, he said that Nauru, along with other island countries in the Pacific, recently strengthened the Nauru Agreement on oceans governance and managing regional tuna stocks, which was essential to the region’s food security and economic development.