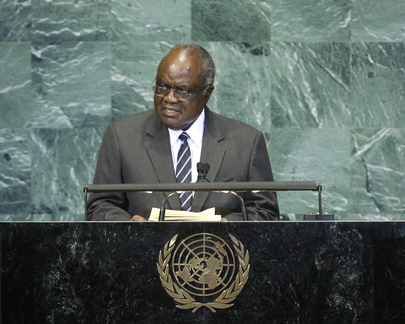 HIFIKEPUNYE POHAMBA, President of Namibia, noted that the 2010 General Assembly theme on global governance was timely, especially in light of how the economic crisis had impacted global development. The United Nations, in its role as an international Organization was positioned to reform the processes of the financial systems. He called for fair trade regulation and market access reforms, as well as a speedy conclusion to the Doha Development Round of world trade negotiations.

Namibia, classified as a high-middle-income country, was still struggling with social challenges inherited from a colonial past. It had the largest unequal distribution of income and resources in the world, yet because of its classification, had declining international development assistance. As such, he appealed to the global institutions involved to allow greater access to support by middle-income countries. He went on to say that the just-concluded Millennium Goals review summit had given world leaders and stakeholders the opportunity to share and learn valuable experiences. Even with the evidence that more needed to be done, “challenges encountered should encourage us and the successes should inspire us all”, he said.

Addressing the issue of climate change and its effect on the global community, he pointed out that Namibia did not significantly contribute to greenhouse gases, yet it was highly vulnerable to climate change and had experienced increased floods and droughts, which destroyed livestock, wild animals and crops. He called on industrial countries to not only bring drastic reductions to greenhouse gas emissions, but to support developing countries in mitigating the effects of climate change and fulfil the commitments made at the Copenhagen climate talks. In that regard, he looked forward to the next meeting of the States parties to the United Nations Framework Convention on Climate Change, to be held in Mexico in November this year.

Turning to the Security Council, he spoke of resolution 1325 (2000), which had been adopted when Namibia had held that body’s rotating presidency. He called for a recommitment to that historic text, which highlighted the plight of women in conflict and their necessary role in the peacemaking process. To that end, the establishment of UN Women as a dedicated entity was welcomed and he hoped it would strengthen the Organization’s capacity to bring equality to women.

For many years, he said, Namibia had been urging that the United Nations system undergo reform, and in particular for the Security Council be to be more representative, democratic and accountable. That Africa remained the only region not permanently represented in that body was evidence that improvement was called for. Peace and security was a collective responsibility, he observed, and Namibia would continue its efforts towards that end. He encouraged the Assembly to “join hands” so a better world could be built.