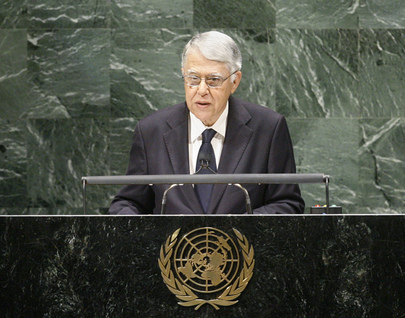 ABBAS EL FASSI, Prime Minister of Morocco, said security, stability, development, prosperity and support for human rights and dignity made up the bedrock of the new international agenda.  This meeting provided a good opportunity to reassert commitment to tackling these priorities, to reiterate determination to promote international cooperation and to lay the groundwork for a new world where safety and solidarity prevailed.

He called on the international community to increase its involvement and work on the settlement of all disputes that strained relations between neighbouring States and hampered the integration of their economies, particularly in Africa.  For its part, to foster healthier relations in its Maghreb region, his Government had submitted an autonomy initiative in 2007 with the goal to end the artificial dispute over the recovery, by Morocco, of its southern provinces.  That bold, innovative initiative had received the support of the Security Council and the international community.  They had also commended the steps taken by Morocco to facilitate a settlement.  He called on other partners to seize the historic opportunity and engage in substantive negotiations under the auspices of the United Nations Secretary-General and his personal envoy.

Achieving peace in the Middle East was not an impossible goal, but one that could only be solved with a two-State solution.  The international community was called upon to support the direct negotiation process, which was a good opportunity to strive to achieve a final settlement in compliance with international laws and relevant United Nations resolutions.  An active participant in the process, Morocco recognized that talks must address the issues of establishing a fully sovereign Palestinian state, with Al-Quds al-Sharif as its capital.  For negotiations to succeed, unilateral actions must be avoided and settlement building must end.  As president of the Al-Quds Committee, he said the city must remain a symbol of coexistence between the Palestinian and Israeli peoples.

Given the combination of crises and climate change consequences that had delayed the attainment of most of the Millennium Development Goals, particularly in Africa, he proposed that the United Nations General Assembly hold a high-level dialogue on investment in Africa.  Similarly, globalization challenges required urgent reform of the current global economic governance structure and further mobilization to build a new, equitable, balanced and efficient environmental order.  Regarding human rights, Morocco had launched major projects and had achieved substantial progress.  Towards expanding the scope of individual and collective freedoms and promoting the rights of its citizens, especially those of women, children and people with special needs, Morocco’s commitment to human rights had been recognized when in March it was chosen as a co-facilitator, at the General Assembly level, of the review process of the Human Rights Council.

The world still had a long way to go before States and peoples learned to accept diversity, he said.  It was of utmost importance that the United Nations Organization became the standard bearer of a culture of peace, tolerance and mutual understanding that served as a catalyst for a new form of cooperation; one based on solidarity and dedicated to achieving the dignity and well-being of all people.