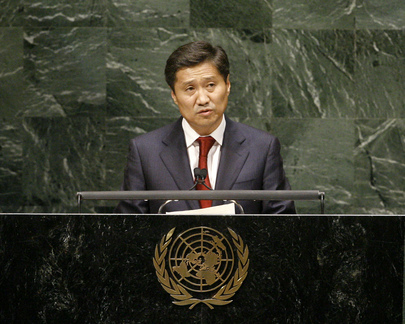 SUKHBAATAR BATBOLD, Prime Minister of Mongolia, stated that experience has shown that the State could deliberately intervene in the economy to promote inclusive growth and sustainable development in what was emerging as a new concept of a “developmental State”. The United Nations was the right place to nurture such concepts, which could have a huge impact on the developmental policies and prospects of its Member States. While the United Nations was a unique forum to synthesize solutions to global problems, he noted, however, that there were challenges that had found or were seeking to find their solutions outside the United Nations. “What has emerged as obvious from our deliberations is the fact that for the United Nations to reaffirm its central role in global governance, it has to be efficient.”

In particular, he said, revitalization of the General Assembly should be further pursued, the role of the Economic and Social Council in global economic decision-making should be enhanced, and the number of permanent and non-permanent seats in the Security Council increased, ensuring fair representation of both developing and developed countries.

He said his Government had recommitted itself to the acceleration of poverty reduction, gender equality and sustainable development — the three Goals where the country was lagging behind. Poverty reduction would focus more on gender equality. Mongolia presented its National Voluntary Presentation on gender equality and the empowerment of women at the United Nations Economic and Social Council and would continue to improve its legislative framework in that regard. But, as a landlocked developing country, it experienced a higher cost of moving goods across borders, which put the nation at a competitive disadvantage and discouraged foreign investment.

Regarding climate change, he said that in less than 20 years, more than 70 per cent of Mongolian territory had been affected by desertification. Yet, adaptation and mitigation techniques suitable for scaling up had not been fully identified or introduced. Moreover, “the strategies and programmes in place have failed to yield the desired results.”

Turning to the multilateral disarmament agenda, he welcomed the outcome of the Nuclear Security Summit and noted that his country declared its territory as “nuclear-weapon-free”. Mongolia also welcomed the increasing role of the International Atomic Energy Agency (IAEA) in contributing to freedom from fear and want. Mongolia’s 2009-2014 Country Programme Framework, which it had signed last year with the Agency, added development of nuclear energy infrastructure and the country’s uranium reserves as a priority area of cooperation.

He welcomed the second review of the United Nations Global Counter-Terrorism Strategy, noting also that Mongolia had taken deliberate steps to enhance its participation in United Nations peacekeeping missions. In terms of promoting democratic consolidation, Mongolia was a party to all major international human rights instruments, and was implementing an independent national human rights action programme, which it had adopted in 2003. But, the implementation of human rights commitments was “hampered largely by two gaps: the knowledge gap and the capacity gap”, he acknowledged. “Human development is at the heart of the policies and activities of my Government,” he stated. National wealth would be distributed to each and every citizen of Mongolia through a newly established Human Development Fund in the form of regular allowances, as well as through health care, education and housing benefits.