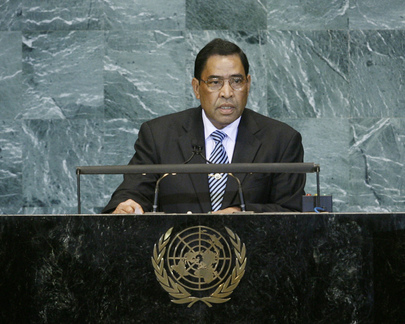 ALIK L. ALIK, Vice President of the Federated States of Micronesia, said that, despite many years of negotiations to curb its devastating effects, the climate change crisis continued.  The negotiating process moved very slowly, while environmental hazards continued to take their toll with devastating results.  As other small island developing States, the Federated States of Micronesia’s future was intrinsically linked to the global climate.  Delays in adopting a comprehensive and legally binding agreement to avert global disaster were without excuse.  He was deeply disappointed by the glacial progress at the negotiating sessions and climate change meetings of the United Nations Framework Convention on Climate Change (UNFCCC), and was growing increasingly alarmed by the prospect of lowering ambitions for the meeting in Cancun later this year.

He said that the Montreal Protocol on protecting the ozone layer could solve a big part of the climate change problem, and his country had developed a proposal with the support of Mauritius, the Marshall Islands, Seychelles and the Philippines, which called for the phasing down of the production and use of Hydrofluorocarbon (HFCs).  He said Federated States of Micronesia was equally proud of an initiative within its own Pacific region launched in August calling for 20 per cent improvement in energy efficiency by suppliers in areas such as transportation and electric power generation, 30 per cent improvement in energy use by end users, and 20 per cent electricity generation through renewable energy by 2020.

While it may seem that island living was idyllic and easy and that island dwellers only demanded action from others, island nations were actively playing their part in maintaining and promoting the protection of the planet.  They accepted responsibility for conserving the biodiversity of the islands and waters, and for using resources in a sustainable manner.  This is why the country, along with like-minded nations, would continue to support the Micronesia Challenge to conserve at least 30 per cent of the near shore marine resources, and 20 per cent of terrestrial resources across the Micronesia region by 2020.

With regards to illegal and unreported fishing, he said there were notable trends towards the disappearance of key tuna species once thought inexhaustible, and the parties to the Nauru Agreement had signed early this year the Koror Declaration, agreeing to introduce further conservation measures to protect key tuna stocks.  Overall, Pacific small island developing States had not claimed their rightful share of their own fisheries resources, and international support should be given to help build those capacities, not only in negotiating agreements and developing fisheries industries, but in realizing a greater share from the benefits of the catch from their own Exclusive Economic Zones.

With regards to the Millennium Development Goals and the Mauritius Strategy, he urged the international community to take into consideration the creation of a special small island developing States category for the Mauritius Strategy Political Declaration.  On other issues, he reiterated support for Japan and India to be given permanent membership to the Security Council, and said that Germany and Brazil also deserved equal consideration.  With regards to peace in the Middle East, Federated States of Micronesia fully supported the peace process and urged all members of the Assembly to play a constructive role in that insurmountable challenge.