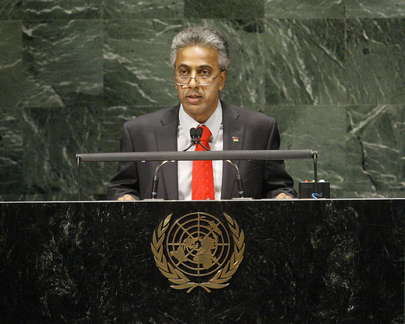 ARVIN BOOLELL, Minister of Foreign Affairs, Regional Integration and International Trade of Mauritius, recalled that world leaders a week ago had reaffirmed their commitment to achieving the Millennium Goals and said that success in achieving them was inextricably linked to the broader agenda of climate change. Hopefully, the Cancun Climate Change Conference later this year would build on the 2009 Copenhagen Accord to bring about a legally binding agreement on limits to greenhouse gas emissions, based on the principle of common but differentiated capabilities and responsibilities, as well as establishment of mitigation and adaptation funds. Joining efforts would prevent missing an opportunity to establish a “climate-smart” world.

Moving on, he said the high-level review of the Mauritius Strategy last week had reaffirmed that small island developing States should be recognized as a distinct category of countries because of an inherent specificity they shared. As such, they deserved special treatment, particularly in accessing ODA and concessionary funding. The present GDP criterion for graduating least developed countries to middle-income country status was most unfair to small island States because their unique vulnerabilities were not taken into account.

The time had come to rethink development, he said. A new development paradigm must be strongly articulated - one where developing countries were part and parcel of solutions to create a more vibrant world economy in a truly multi-polar world. The Doha Development Round should be concluded as early as possible. The gap must be closed in the provision of “aid for trade” to support the building of supply capacity. As the new chair of the Indian Ocean Commission, his country would emphasize strengthening the region’s economic and commercial space, including by implementing a regional strategy on fisheries and aquaculture, promotion of tourism and development of an anti-piracy programme.

Touching on the subject of human rights and his country’s membership in the Human Rights Council, he also called for Security Council reform and reviewed the situations in Myanmar, Madagascar, the Middle East and Somalia. He said his country would host the Second Ministerial Conference on Piracy next month in collaboration with the European Union, the Indian Ocean Commission and the Common Market for Eastern and Southern Africa (COMESA). Finally, he urged the United Kingdom to unconditionally and without delay return the Chagos Archipelago to his country, including the atoll of Diego Garcia, and said his country and France had earlier this year come to an agreement on co-management of Tromelin Island and its maritime zones with prejudice to the sovereignty of Mauritius over the island.