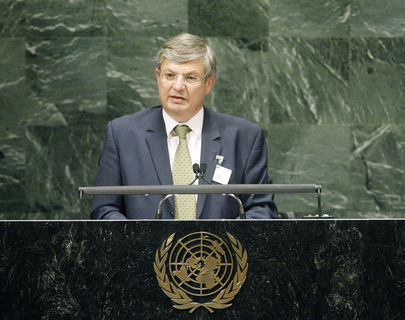 TONIO BORG, Deputy Prime Minister and Minister of Foreign Affairs of Malta, said during the past 12 months the international community had been overwhelmed by global and financial crises exacerbated by the many humanitarian tragedies around the world. In the face of destruction, loss of life and increased forcible displacement of people worldwide, the United Nations continued to be the refuge for the most vulnerable and deprived of our societies for addressing increasing inequality, responding cohesively and rapidly to calamities and in efforts to improve the very nature of humankind. It was an accepted norm, he said, that “there is no development without security, no security without development and neither without respect for human rights”.

There have been important achievements in the past months in disarmament and non-proliferation, he said, including the proposal from the Non-Proliferation Treaty Review Conference to hold a 2012 conference to address establishing the Middle East as a zone free of weapons of mass destruction. Positive developments in the Middle East could be enhanced by closer Euro-Mediterranean cooperation and Malta, a European country but nonetheless Mediterranean, acted as a political and cultural bridge to its neighbours. Among its initiatives, Malta hosted the European Commission-League of Arab States Liaison Office which formalized relations between the European Commission and Arab World. Malta had played an active part in the Union for the Mediterranean and next month would be hosting the Mediterranean Conference of the Organization for Security and Cooperation in Europe (OSCE), and in November would be the venue of the first regional conference for the Mediterranean of the United Nations Alliance of Civilizations. And, on an issue closely related to the Mediterranean, Malta joined others welcoming Israel and Palestine’s decision last month to resume direct negotiations, supporting creation of the right conditions where all peoples of the Mediterranean and the Middle East “will live in peace and prosperity”.

This year brought stark reminders of the devastation and loss of life that could be expected from climate change if it continued unabated: floods and landslides in Asia, droughts in Europe and Africa and wildfires in the Russian Federation, he said. Despite such warning, the international community had not adopted a sufficiently ambitious response to mitigate climate change and the great expectations of a decisive push forward in Copenhagen last year had not been realized. “Nevertheless, we must persevere on the road ahead, perhaps more pragmatically than dramatically,” he said. Copenhagen had produced several seeds that could perhaps be harvested in Cancun. Vulnerable States like Malta had no option but to prepare for expected climatic impacts and intended to promote cooperative regional action, including in the context of the Mediterranean Climate Change Initiative announced by the Prime Minister of Greece.

Protection of human beings also continued to be a top priority, and he welcomed the initiative to set up a United Nations joint office to deal with prevention of genocide and other crimes and the small, but welcome progress on discussion of the Responsibility to Protect. The adoption of the United Nations Global Plan of Action against Trafficking in Persons was another important development. Malta attracted a disproportionate influx of illegal immigrants and asylum-seekers; it affirmed its commitment to international obligations, but reiterated calls for the international community to continue to assist resettlement of these unfortunate people. Malta, as one of the world’s leading flag States, was also very concerned about the increase in pirate attacks off the coast of Somalia, and intended to promote debate in the international community on new issues in the law of the sea. It also intended to launch constructive debate on the question of human responsibilities, as it believed rights and duties were needed together to form a democratic society.

Concluding, he paid tribute to the memory of Guido de Marco, former President of Malta and President of the forty-fifth session of the General Assembly, who died last month. He said Malta would be guided by Mr. de Marco’s “vision for and love of the United Nations” as it continued its support for the Organization and worked to make the world a better place for present and future generations.