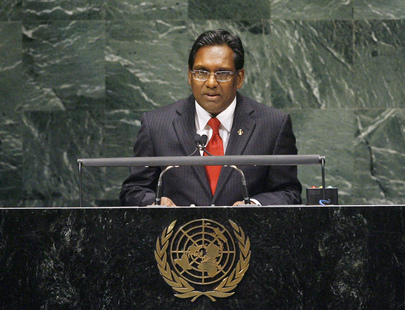 MOHAMED WAHEED, Vice-President of Maldives, said several of the Millennium Development Goals remained challenges for his country to achieve.  While great strides had been made in eliminating poverty, promoting education and improving mortality rates among mothers and their infants, more needed to be done with regard to the empowerment of women.  His country had also been struggling to provide for its environmental and development needs.  Those gains achieved had improved the lives of citizens, and contributed to an impending graduation from the United Nations list of least developed countries.  While his country looked forward to its graduation, there was concern about the sudden withdrawal of some benefits afforded to least developed countries that had once sustained its development projects.

The Maldives looked forward to adopting a development strategy which placed emphasis on greater independence and economic stability through private investment and public-private partnerships.  However, like many other small island States, geopolitical and socio-economic circumstances kept his country vulnerable.  As a country primarily dependent on tourism and fishing, his country was severely affected by decreases in consumption in its traditional markets.  He noted that the economic transition in his country complemented an ambitious political transition from autocracy to democracy.  Important milestones had been achieved over the past two years, including the end of a two-year period of transition this past August.  The Maldives´ transition to a democracy was accompanied by its evolution from an abuser of human rights to a staunch advocate for them, he added.

In a now interconnected global village, the need to compel tolerance, understanding and respect for human dignity was greater than ever before.  In that regard, he lamented over the rising tide of “Islamophobia” in non-Muslim States.  He believed that religious intolerance, negative stereotyping, racial profiling and discrimination thwarted the United Nations’ mission for peace and prosperity among all societies.  He called for intensified efforts to promote a culture of tolerance and understanding.  Turning to the issue of climate change, he said the effects of global warming posed an overwhelming threat to his country.  In an attempt to implement adaptation measures, the Maldives had invested in water and sanitation projects, coastal defences and a low-carbon future, which emphasized renewable energy and aimed to become carbon neutral by 2020.

However, he stressed that “our actions alone cannot save us”, calling for the global community to pursue regional initiatives that complement United Nations Framework Convention on Climate Change (UNFCCC) processes.  Failure to extend emission targets beyond 2012 would leave 60 per cent of the world’s population without durable solutions to global warming effects.  He had high hopes for the upcoming sixteenth, seventeenth and eighteenth Conference of the Parties to the Convention, yet he believed that alternative solutions should exist.  He called upon all nations – large and small – to cooperate in Cancun to effectively establish and promote mitigation activities.

With regard to traditional security threats, he said the scourge of terrorism and piracy threatened countries in Asia and worldwide, and deficit in the capacity to attribute criminal accountability to the perpetrators of terrorism persisted.  He stressed the need for the Assembly to finalize the draft convention on terrorism, noting that the Maldives was particularly vulnerable to threats to its maritime security.  “If the international community does not increase its efforts, we fear that piracy may end up turning into an uncontrolled threat to security in the region.”  He was encouraged by Security Council resolution 1887 (2009) and pleased with the work of the Contact Group on Piracy off the Coast of Somalia, but felt it was important for the Group to urgently establish an easily accessible legal toolkit to enable States to overcome the vacuums in their legal systems.  Lastly, he called for all those involved in the Israel-Palestine peace talks to use the negotiations as an opportunity to resolve differences, as well as continued support for the Governments of Jordan and Egypt in their work on the Arab initiative.