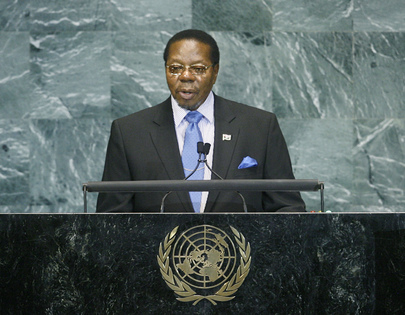 BINGU WA MUTHARIKA, President of Malawi and speaking as Chairman of the African Union for 2010, said African leaders believed that the United Nations was well placed to build political consensus for global governance. More than ever before, the United Nations needed to strengthen its institutions to promote peace and stability and facilitate balanced growth and prosperity. International media glorified the Africa of underdevelopment and hopelessness, but that media did not present the success stories in participatory democracy and good governance and others by a number or African Governments. He wanted to present another Africa of new hopes and opportunities — the Africa of the new beginning. The world should know that African Union leaders had a clear vision of a new Africa free of hunger, disease and poverty. African Union leaders had decided to unlock its combined huge natural resources and human capital; Africa was not a poor continent, but rather it was its people that were poor.

Five years from now, Africa would be able to produce enough food to feed its people. African leaders also decided that five years from now, no child in Africa should die of hunger or malnutrition. To meet those targets, African leaders had agreed to focus policies on three priority areas: agriculture and food security; transport and energy development; and climate change. The “African Food Basket” concept envisages full cooperation between African and Group of Eight (G-8) Governments, the United Nations and other multilateral institutions.

Among the major concerns of Africa were the adverse effects of climate change, fragile peace and security, terrorism and piracy, maternal, infant and child mortality and slow reform of the United Nations. African countries were among the least equipped to cope with the impacts of climate change and the international community acknowledged climate change was a real threat to humanity. Yet, the intransigence of major players at the Copenhagen Conference disappointed Africa and other developing nations. On behalf of Africa, he called for immediate implementation of the United Nations Framework Convention on Climate Change and the Kyoto Protocol, in order to avert impending human catastrophe. Africa also appealed to developing partners and donors for increased resources towards maternal, newborn and child health and called for an urgent conclusion of the Doha Round Multilateral Trade negotiations that provided clear benefits for developing countries.

The African Union believed that without peace and security, democracy and good governance, development could not be sustainable. Several African countries had conducted peaceful elections and there was growing tolerance between ruling and opposition parties in many countries, but Africa has also lately witnessed the re-emergence of coups d’état and other unconstitutional changes of government. The African Union took a strong collective decision that those negative trends would not be allowed to continue. It was also gravely concerned that Somalia has had no stable or functioning Government for a long time, a situation compounded by rising organized piracy in the Indian Ocean, and called for more countries to be involved in finding a lasting solution to the crisis. He said the general consensus in Africa was the International Criminal Court’s push for the arrest of Sudanese President Omer Hassan al-Bashir would hamper efforts at lasting peace in Sudan. He, therefore, appealed to the General Assembly to amend article 16 of the Rome Statute to enable it to assure the powers of the Security Council to defer the case for one year to allow ongoing negotiation to succeed.

The African Union called for immediate lifting of sanctions against Zimbabwe and Cuba, which have caused great hardship and whose ideological justifications, if there ever were any, had outlived their time. On the development of nuclear energy for peaceful purposes, the African Union supported the position taken by the Non-Aligned Movement, which called for justice and equal treatment for all concerned nations. There was a need to implement fair reforms of the United Nations and Security Council, and he reiterated the African Union’s request for two permanent seats with full veto powers and five non-permanent seats. The African Union should also have the right to determine Africa’s representative in the Security Council. Those reforms would allow Africa to effectively participate in global governance propagated by the United Nations.