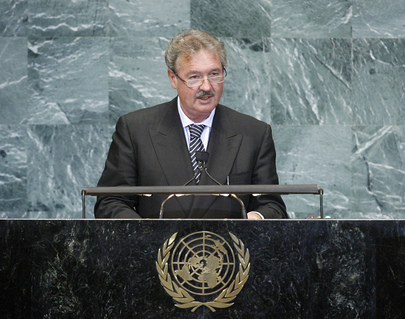 JEAN ASSELBORN, Deputy Prime Minister of Luxembourg, said the President had quite rightly organized the general debate on the subject of “Reaffirming the central role of the UN in global governance” since only the United Nations had the necessary scope, knowledge and legitimacy to develop and implement effective policies to address global challenges. Luxembourg welcomed the renewed commitment to fight poverty, noting a true partnership for development was based upon shared responsibilities for both donor and recipient countries. If good governance, rule of law, capacity-building and ownership were expected of developing countries, developed countries must meet their commitments in terms of aid quality and quantity, particularly in Africa. Luxembourg’s ODA had reached 0.7 per cent of gross national income (GNI) in 2000; in 2009, it surpassed 1 per cent.

The duty to prevent, contain and resolve conflicts was a central aim of the United Nations, and peacekeeping had reached an unprecedented scale in recent years. But, the mass rapes and sexual assaults this summer in the Democratic Republic of the Congo and the inability of the United Nations Mission to protect civilians there was a brutal reminder of the difficulties of peacekeeping without adequate resources and mandates. Further, the assaults highlighted the importance of a consistent United Nations commitment to eradicating the use of sexual violence as a weapon in wartime. “Impunity must end,” he said. The primary responsibility for the safety of citizens, the fight against impunity and establishment of law lay with the Congolese Government, but the international community must do everything to support its efforts, so the people responsible for those horrendous crimes were found, tried and punished.

He also called for a solution to the Israel-Palestine conflict based on the coexistence of two States, and hoped the resumption of talks would give birth to peace and security between Israel and its neighbours. It would be important for both parties to show determination and courage and act only according to international law – hence the importance of ending all settlement activity. He was heartened to see the European Union persist in its call for a prolongation of the moratorium on settlement activity beyond 26 September. In Sudan, the prospect for a definite settlement was taking shape at last and the international community must help it through this critical period – the referendum on self-determination of southern Sudan and Abyei. Further, increased efforts were needed to support African Union and United Nations initiatives towards a just political solution in Darfur, where continuing violence threatened stability of Sudan and the region. He also called for a comprehensive approach to end conflict in Somalia, saying Luxembourg intended to continue support for the Djibouti peace process.

Disarmament and non-proliferation should also not be overlooked when discussing ways to guarantee and strengthen peace. The success of the 8th Conference on the NPT brought the world closer to a common goal for all – a “world free from nuclear weapons”. It would now be important to ensure full implementation of those decisions, including holding a conference in 2012 on a nuclear-weapon-free Middle East. He also welcomed the coming into force of the Convention on Cluster Munitions, being one of the first countries to sign it, and advances towards a binding instrument on trade in conventional weapons. His country was organizing a symposium on the Arms Trade Treaty for next week.

If one believed in a multilateral approach to all those issues, then there was also a need for decisive internal reforms, including reform of the Security Council to make it more inclusive and representative of today’s realities. Instruments at the United Nations disposal such as peacekeeping operations, the Peacebuilding Commission, the Human Rights Council and the integration of human rights in all action must be revised. The United Nations needed to overcome systemic fragmentation and enhance the coherence of its structures, and an important step in that direction was made this year with the creation of UN Women. He welcomed the appointment of Michelle Bachelet as head of UN Women and said she could rely on the full support of Luxembourg.