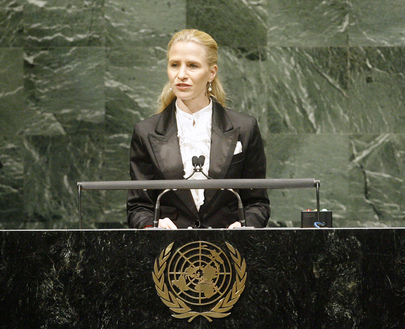 AURELIA FRICK, Minister for Foreign Affairs of Liechtenstein, said that global governance could only be effective if it was truly global in reach and participation. A system where a few made decisions that everyone was expected to implement would be both unjust and ineffective. Past experience had repeatedly shown that multilateral action could only succeed when based on a broad political consensus, which was not the same as giving everyone a right to veto. Strong fundamental agreement among States was the only way to ensure that decisions were effectively put into practice. The United Nations was the place to make that happen. It was necessary to invest in the Organization to make the required improvements, instead of looking for solutions outside.

She lauded the fact that, in the context of the G-20, the largest developed nations and most powerful emerging countries were jointly discussing matters affecting the global economic and financial architecture. The recent global economic and financial crisis illustrated the importance and indispensability of common action by the G-20 in that regard. Liechtenstein would support the G-20’s further efforts to address the systemic issues that had led to the crisis. At the same time, inclusion and participation should be high on the agenda and its work better integrated into the United Nations system. The quality of the G-20’s discussions and their outcome would greatly benefit from the views of all those directly affected by the matters under consideration. In that regard, Liechtenstein was an active member of the Global Governance Group.

The United Nations central role could only be safeguarded if it was put to use to effectively solve such problems as climate change, disarmament and others where results had been insufficient, she said. While the Security Council had the power to make legally binding decisions, the strongest tool in international law, its success was increasingly undermined by the perception that Council decisions lacked the requisite political legitimacy. That was due largely to its composition, which no longer reflected today’s geopolitical realities. But an agreement to change that had been elusive for more than a decade. A middle ground could be the right answer. She suggested creating a new category of seats allowing States elected by the wider membership on a recurrent basis to serve permanently on the Council.

If the Council indeed was to carry out its functions on behalf of the full United Nations membership, it must also be ready to listen to those it represented, she added. In the last few years, the “S-5” countries tasked with working methods had begun a process of reflection on gradual improvements in the Council’s own interests. She pointed to the damage to the United Nations due to management failures and system breakdowns in procurement and accountability. Despite progress in strengthening internal oversight and accountability, more management reform was needed. She added that, given the massive crimes committed against civilians worldwide, a common stance against impunity was more important than ever.