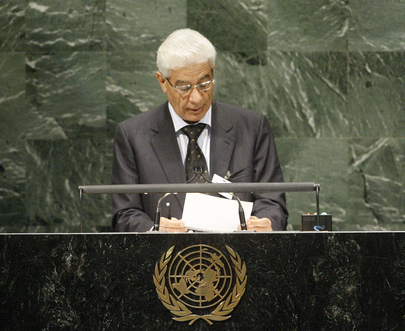 Opening the afternoon session of today’s debate, MUSA KOUSA, Secretary of the General People’s Committee for Foreign Liaison and International Cooperation of Libya, said peace would not be achieved without the complete elimination of weapons of mass destruction and implementation of the Nuclear Non-Proliferation Treaty. That Treaty had to apply to all, without distinction. He reminded the Assembly that Libya had suggested amending the Treaty to ensure the disarmament of countries holding those weapons as well as to let IAEA perform its duties and verify the reduction of nuclear arsenals, which were the biggest threat to humankind. That issue should be given high priority and the possession and use of nuclear energy for peaceful issues should be encouraged. He reaffirmed the use of Libya’s voluntary initiative — to renounce all activities related to the production of banned materials — as a role model to the nuclear-weapon States or States seeking possession of such weapons.

On the issue of United Nations reform, he said the Organization was at a crossroads. The Assembly should become the real legislator, with binding resolutions, as it truly represented the parliament of the world. The Security Council should be an operational instrument for the Assembly’s resolutions. The best solution for Council reform would be to grant its permanent memberships to regional unions. Africa’s demand for a permanent seat was a legitimate request and would put the continent on an equal basis with other geographic and regional groups. Libya again urged the United Nations to move its Headquarters to another site and asked the Assembly to create an open-ended group to consider the issue and the offers made by Member States, including Libya.

Turning to security issues, he said that anti-personnel mines were used by vulnerable States to defend their territories against invading forces; the powerful States did not need them, as they had arsenals of advanced weapons. In that context, the Convention on the Prohibition of the Use, Stockpiling, Production and Transfer of Anti-Personnel Mines and on Their Destruction (Ottawa Convention) should be amended, taking into account the interest of the small States. He condemned the deliberate confusion between the terrible phenomenon of terrorism and the biased distortion of the struggle of colonized people. Libya believed in the right of people to resist foreign occupation. The act of listing honourable liberation movements under the category of terrorist organizations could only entrench chaos, ambiguity and lack of clarity. The manner in which the struggle of the Palestinian people was being labelled prejudiced their legitimate struggle. It was fed by a racist creed that denied the right of existence and self-determination of the oppressed people.