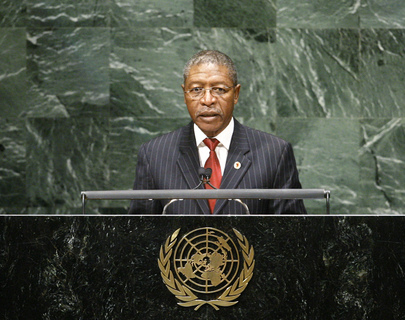 PAKALITHA B. MOSISILI, Prime Minister of Lesotho, said despite the United Nations efforts to “save succeeding generations from the scourge of war”, unilateralism and war remained the order of the day.  Further, disrespect for international law, vast economic inequity and the suppression of basic freedoms were challenges faced today, just as they were 65 years ago.  In addition, it now had climate change, the effects of the financial crisis, terrorism and religious intolerance to contend with, and those had heightened the threat to world stability, international peace and security.

The lesson of the first decade of the millennium, he noted, was that mankind must turn away from the path of self-destruction; war was brutal, destructive and unacceptable.  The founding fathers were right when they affirmed the centrality of the United Nations in global decision-making.  The world community also must admit that great injustices were being committed and human rights trampled upon “as we stand by silently”.  In that regard, he said the United Nations must reverse the injustices suffered by the people of Western Sahara, Cuba and Palestine.  In addition, Zimbabwe must be freed from unilateral sanctions, and in Madagascar, external interests must not be allowed to take precedence over the desire for democracy and stability.  Somalia, he said, remained a “festering wound” on the African continent, and he reiterated the Somali Government’s appeal to allow its people to join the international movement towards peace.

Climate change continued to wreak havoc, most notably on developing countries, he said.  In that regard, Lesotho signed the Copenhagen Accord because it believed it represented a step forward, and he hoped the upcoming Cancun conference would lead to a legally-binding commitment towards climate change.  He said the financial and economic crisis disrupted Lesotho’s strategies toward reaching its Millennium Goals by 2015, and, therefore, appealed to development partners to fulfil their commitments for official development assistance.

He said religious intolerance was closely related to terrorism; thus, religious tolerance was a pre-requisite for international peace and security and, therefore, cultivating a culture of religious tolerance must be high on the international agenda.  Lesotho remained committed to a world free of nuclear weapons and continued to support international disarmament and non-proliferation regimes.  Africa’s leaders had declared 2010 the Year of Peace and Security, yet had acknowledged shortcomings in terms of capacity in peacekeeping and peacebuilding.  They called upon the international community to complement its efforts to resolve conflict.  In closing, he said overcoming challenges required reform within the United Nations as the centre of global governance.  “Let us remember that might can never be right, and can never defeat collective resolve.”