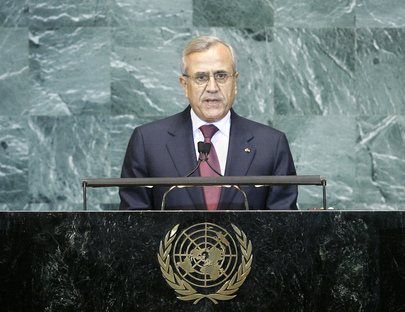 MICHEL SLEIMAN, President of Lebanon, noting that this was the first time he was addressing the General Assembly since Lebanon had been elected as a non-permanent member of the Security Council, said his country was proud to assume such responsibilities, including in the service of Arab concerns and the cause of justice and peace in the world. He welcomed the statement issued following the High-level Meeting regarding the Millennium Development Goals. He commended the United Nations progress towards strengthening the role of women, calling that an issue of special interest, since Lebanon had proved a pioneer in the region by granting women the right to vote in legislative elections in 1954.

Citing the important political role of the United Nations and the Organization’s resolutions concerning the Arab-Israeli conflict, he noted, however, that the Organization’s efforts had faded in the face of Israeli intransigence and inclination for expanding and adopting a settlement policy. He explained that it would be impossible to reach a permanent solution for the Middle East unless all aspects of that conflict were justly and comprehensively addressed and unless the international community worked to ensure means for implementation. Any solution must be based on resolutions relating to Madrid’s Terms of Reference and the Arab Peace Initiative, particularly those assuring the rejection of the Palestinian refugees’ settlement in Arab host countries, should their circumstances contradict such settlement.

He emphasized that the settlement of Palestinian refugees on Lebanon’s territories, which the country had frequently declared it would not accept, would provoke repercussions and dangers affecting security and stability. The Palestinian refugees issue could not be solved through Israeli-Palestinian negotiations alone, in a way that disregarded Lebanon and other concerned host countries.

The responsibility for ensuring the well-being of the international community fell on all stakeholders, he continued, and added that increasing contributions to the United Nations Relief and Works Agency for Palestine Refugees in the Near East (UNRWA) budget would guarantee a decent life for the Palestinian refugees under the sovereignty of host countries. He added that Lebanon condemned international terrorism, calling for exploring means to clearly define it and address its root causes so that it would be distinguished from legitimate foreign occupations.

While noting that Lebanon was committed to Security Council resolution 1701 (2006), he said that Israel violated Lebanese airspace, territories and waters daily, and that the Israeli spying networks’ work to destabilize his country had reached a point necessitating the international community to take a firm position to thwart Israeli aggressions and make Israel withdraw from Lebanese territories that it still occupied. Lebanon retained its right to retrieve occupied territories by available means and asserted its right to dispose of its waters, oil and natural gas wealth in accordance with international law. Commending the efforts of the United Nations Interim Force in Lebanon (UNIFIL), he also reemphasized the importance of cooperation with the Lebanese Army to ensure proper implementation of the mission.