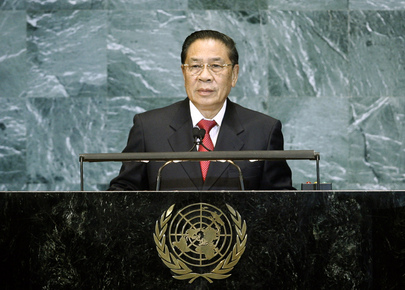 CHOUMMALY SAYASONE, President of Lao People’s Democratic Republic, said increasing natural catastrophes and the economic crisis had made national challenges a something a single country or even a group of countries cannot alone overcome. Therefore, it was critical for all United Nations Member States to enhance cooperation in a sincere and trustworthy manner, avoiding taking advantage of one another. The use and proliferation of weapons in all forms would undoubtedly have long-term impact on people’s lives and impede national development efforts.

The Lao People’s Democratic Republic continued to suffer the consequences of wars that ended several decades ago, which contaminated 30 per cent of its soil with unexploded ordnances that killed and injured innocent people and constituted a major constraint achieving national objectives and the Millennium Development Goals. He went on to say that it was a great pride that his country had played an active part in the Oslo Process which led to adoption of the Convention on Cluster Munitions.

He said Lao People’s Democratic Republic would closely cooperate with the international community to ensure the Convention was fully implemented, and was hosting in November the First Meeting of State Parties to that instrument. He extended a cordial invitation to all United Nations Member countries, international organizations and non-governmental organizations concerned to play an active part to ensure a successful outcome of the Conference. Cooperation among South-East Asian countries had steadily expanded to contribute to the narrowing of the development gap.

Timely measures by the Government over the past years had steadily progressed socio-economic development, he said. The economy had grown at an average of 7 per cent annually, poverty continuously declined and livelihoods of the multi-ethnic population had gradually improved. Nevertheless, the Lao People’s Democratic Republic remained challenged by the global financial and economic crisis and, like other developing countries, required assistance and support from the international community to enable it to achieve the Millennium Development Goals.

The Lao People’s Democratic Republic also needed support to reach the ultimate goal of quitting the status of a Least Developed Country by 2020. The Laotian Government reiterated its firm commitment to work closely with other countries to build a peaceful world under a just and more democratic new order, based on cooperation tackling various global challenges. Only through genuine partnership could the world be peaceful and prosperous.