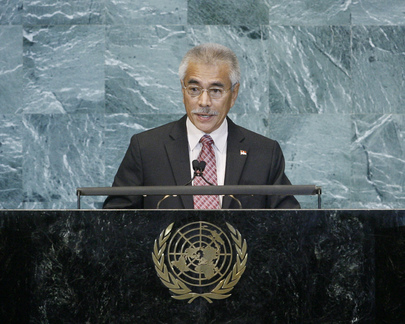 ANOTE TONG, President of the Republic of Kiribati, said climate change was the “greatest moral challenge of our time” and it was ironic that the poorest and smallest countries with the least contribution of greenhouse gases were paying the ultimate price, so the lifestyles and development agenda of some countries could be maintained.  Copenhagen failed to meet the expectations of many people, but especially those countries on the frontline for whom climate change posed the greatest threat.  For low-lying island countries like Kiribati, Tuvalu, the Maldives and the Marshal Islands, climate change was a matter of survival.  He hoped to use this session to communicate “the deep sense of urgency and growing sense of despair besetting our people in the face of this oncoming catastrophe”.

It was important that adaptation funds not be regarded as additional development funds by either development partners or recipient countries, but be provided solely for adaptation to the harmful impact of climate change, he said.  The international community needed to modify its approach to Mexico, if it was to succeed.  Any alternative to a legally binding framework was unacceptable and would have potentially destabilizing consequences.  It was not surprising that the most vulnerable countries, spending their limited resources fighting the onslaught of rising seas and storm surges that impacted their homes and livelihoods, were not on track to achieve most Millennium Development Goals.  It was imperative that the pledges made in Copenhagen for fast-start funds to assist vulnerable countries to adapt to the impact of climate change be mobilized at the earliest opportunity.

To maintain the health of its biodiversity, Kiribati designated the Phoenix Islands Protected Area (PIPA) as the largest marine protected area and marine World Heritage Site.  PIPA covers an area of more than 400,000 square kilometres, about 11 per cent of its Exclusive Economic Zone, and was a collaborative partnership with Conservation International and the New England Aquarium.  It provided a natural breeding ground for tropical fishery and ocean ecosystems and was a “gift to humanity”, he added.  Describing a number of regional initiatives for conserving biodiversity and ecosystems, he said such steps were not only important for the sustainable development of the Pacific peoples, but were of vital importance to the rest of the world.  Thus, support for protecting ecosystems should not be viewed as a handout, but as an “investment for future generations of this planet”.

In closing, he said “As we chart the path towards a new world order, we must address the fundamental threats to the very existence of the units that make up our organization.”  The international community had to guarantee the survival of everyone by addressing this “defining challenge of our era”.  Climate change had to be resolved before it was too late for the frontline nations and for humanity.  “Maintaining the status quo is simply not an option,” he said.