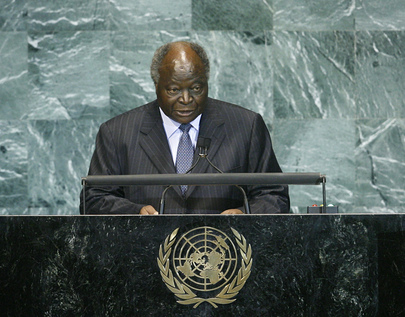 MWAI KIBAKI, President of Kenya, said since his last address to the Assembly in 2008, Kenya had made tremendous progress in implementing far-reaching reforms to entrench democracy and secure peace and stability. Kenya’s new Constitution, promulgated on 27 August following a successful national referendum, greatly improved the country’s governance structure and laid a firm foundation for political stability and economic prosperity. It injected vitality and a sense of renewal and would go a long way towards achieving the Millennium Development Goals. He expressed hope that it would help consolidate democratic governance in the region.

Kenya had invested significantly in pursuing the millennium targets, he said. It had made substantial progress in poverty reduction and education, reducing maternal and child mortality, fighting HIV/AIDS and malaria and promoting gender equality and women’s empowerment. Kenya had taken major steps to enhance environmental sustainability. It had reclaimed and protected its five major water towers; invested in wind, solar and geothermal energy; and made comprehensive commitments to green the economy. Still, it faced many negative consequences of climate change. Its crop and livestock agriculture, on which most of the population depended, was at the mercy of unpredictable weather patterns. He noted with deep concern the international community’s inability to make headway in critical climate change negotiations, and looked forward to positive outcomes from upcoming meetings on the subject in Mexico and South Africa.

Turning to one of the “major obstacles” to peace and development in the region, he said continuing political instability in Somalia was festering beyond that country, and since the early 1990s, Kenya had borne the full weight of it. The security situation in Somalia continued to deteriorate and threaten regional peace and stability. Its threat to international peace and security was greater than in any other conflict in the world. But, Somalia continued to suffer benign neglect from the international community, resulting in many lost opportunities to solve the crisis. The Council’s perceived reluctance to engage with Somalia was of great concern to those who suffering the greatest consequences of the conflict. Today, he wanted to draw the attention of the international community to another opportunity that should not be lost.

In July, the Inter-Governmental and Development Summit (IGAD) identified critical elements of engagement and made several decisions endorsed by the African Union Summit in Kampala, on the way forward, he said. But, the international support needed to implement them had not been forthcoming. He urged the United Nations and the international community to seize the opportunity created by the African regional initiative to support the appointment of an eminent high-level personality for Somalia, effectively deploy 2,000 troops, review the current mandate of the African Union Mission in Somalia (AMISOM) to enhance its peace enforcement capacity and support the Transitional Federal Government to bolster its effectiveness countrywide.

As chair of the IGAD Committee on Sudan, he said he was actively engaged in implementation of the Comprehensive Peace Agreement, which held the key to peace and stability in Sudan and the region. He had received assurances from Sudan’s President and First Vice-President that they were committed to remaining on course in preparing for the referendum, resolving all outstanding issues, holding it on 9 January 2011, and accepting the results. It was critical that the world support those initiatives. Continued engagement with the leadership of the National Congress Party and the Sudan People’s Liberation Movement was the only way to peacefully resolve the challenges facing Sudan. He said he would convene a second IGAD special summit on Sudan in November to take stock of progress, ensure the process remained on course and support efforts for post-referendum arrangements.