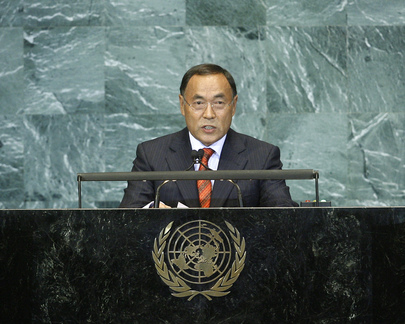 KANAT SAUDABAYEV, Minister of Foreign Affairs of Kazakhstan, recalled that 29 August 1949 had marked the first atomic explosion carried out on ancient Kazakh land, near Semipalatinsk, unleashing a nuclear arms race.  On 29 August 1991, the Government shut down one of the world’s largest nuclear test sites.  His people knew all too well the horror of nuclear tests and a total ban of such weapons was of special relevance to them, he said, calling on States that had not yet done so to sign or ratify the Comprehensive Nuclear-Test-Ban Treaty.  Other steps were needed towards nuclear disarmament, including an early drafting of a fissile material cut-off treaty.

The drafting of a legally binding international instrument that provided security assurances by nuclear Powers to non-nuclear-weapon States was also extremely important, he said, as was movement towards establishing nuclear-weapon-free zones, which would help create trust in the Middle East, among other regions.  The world’s largest uranium producer, Kazakhstan planned to contribute to the development of nuclear energy and was ready to host an international nuclear fuel bank, under International Atomic Energy Agency (IAEA) auspices, and commit to its safe storage.

He said a summit, organized by the Organization for Security and Co-operation in Europe (OSCE), which Kazakhstan chaired, would be held in December to shape a common security community in the Euro-Atlantic and Eurasian zones.  The issue of Afghanistan would be discussed, as would the creation of a mechanism to prevent conflict.  As for new threats, he said the Kazakh Government supported the early adoption of a convention on global terrorism and, on a related note, attached great importance to the Central Asian Regional Information and Coordination Centre for combating illicit trafficking in drugs, psychotropic substances and precursors.

Welcoming activities to observe the International Year of Rapprochement of Cultures, and work of the Alliance of Civilizations, he said Kazakhstan favoured the use of regional arrangements, like the Organization of the Islamic Conference, in efforts to overcome nationalism and religious intolerance.  In other areas, he said Kazakhstan had proposed developing a new financial architecture with a global financial market oversight system at its core.  To address environmental concerns, Kazakhstan planned to hold ministerial conferences for the Economic and Social Commission for Asia and the Pacific (ESCAP) and the Economic Commission for Europe (ECE), in 2010-2011, with a view to building a “green bridge” between Europe and Asia.  Kazakhstan also passed its first Universal Periodic Review in the Human Rights Council last February.