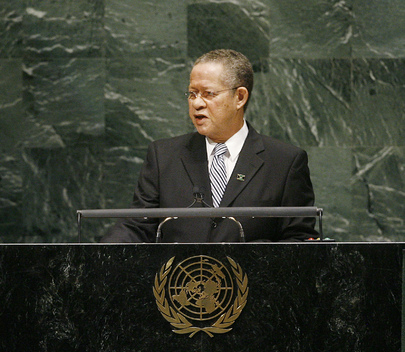 ORETTE BRUCE GOLDING, Prime Minister of Jamaica, said the impact of climate change showed that everyone in the world “lived under the same canopy”.  Diseases knew no boundaries, natural disasters did not discriminate in selecting targets, and the financial crisis in the United States ricocheted around the world, affecting millions.  It was in that interconnectedness and interdependency that collective strengths and weaknesses could be found, as the playing field of the world was still not level.

However, the existing international financial system and multilateral trading arrangements would not enable those imbalances to be redressed.  The new millennium should not be defined by the “survival of the fittest”, he said, underlining the importance of redressing the “lopsidedness” in international trade in restoring and sustaining global economic growth.  Jamaica’s insistence that the Doha Round must include a development dimension to build competitiveness and capacity in weak exporting countries, as well as special and differential treatment calibrated to differing levels of development, economic size and vulnerabilities offered a win-win situation.  He called for every effort to be made to conclude the Doha Round in that spirit.

The global financial crisis had exposed weaknesses in the governance of the international financial system that had become more acute with changes in the global landscape.  A reform was needed to improve standards of efficiency and accountability.  At the same time, while he welcomed the establishment of the Group of 20 as the locus of global economic policy planning, he urged it to institute a mechanism to engage the views of the wider developing world.  Furthermore, he urged multilateral agencies to move beyond the objective of ensuring that the international payments systems were secure.  Bold, new thinking which emphasized development as the primary focus of multilateral intervention, was required.

Turning to climate change, he was disappointed that the Climate Change Summit in Copenhagen had failed to reach consensus on mitigation and adaptation strategies.  He was, however, hopeful that the upcoming conference in Cancun, Mexico would further advance the process and eventually lead to a legally-binding and comprehensive agreement under the UNFCCC and the Bali Road Map.  As countries among the most vulnerable to global warming, the Caribbean Community (CARICOM) and its partners in the Alliance of Small Island States would continue to defend the long-term stabilization of greenhouse gas concentrations, with a cap of 1.5° C above pre-industrial levels.  The commitment by developed countries to provide $30 billion to assist developing countries in improving mitigation and adaptation strategies over the next two years was an opportunity to “demonstrate that when we speak, we say what we mean and mean what we say”.

He went on to stress that the earthquake in Haiti and floods in Pakistan were stark reminders of an increasing vulnerability of many countries to natural disasters.  Haiti’s reconstruction was CARICOM´s most urgent priority, he said, urging donors to take actions which followed their commitments of nearly $10 billion.  He underscored the important role played by the United Nations Stabilization Mission in Haiti (MINUSTAH) in ensuring a sustainable future for the Haitian people.

On the issue of the “twin menace” of the illicit trade in narcotic drugs and small arms, his country had adopted a multifaceted approach to tackle crime and violence, relying on law enforcement, strategic social intervention and social transformation initiatives to create new opportunities and inspire hope.  “But, we cannot do it alone,” he said.  The transnational nature of organized crime required cross-border collaboration at the bilateral, regional and international levels.  In that regard, he called for the conclusion of a legally-binding instrument to curtail the illicit trade in small arms, light arms and ammunition and urged the United Nations to approach the issue with urgency.  In closing, he commended the United Nations Educational, Scientific and Cultural Organization (UNESCO) for its decision to launch an international competition for the design of the permanent memorial to honour the victims of the transatlantic slave trade.