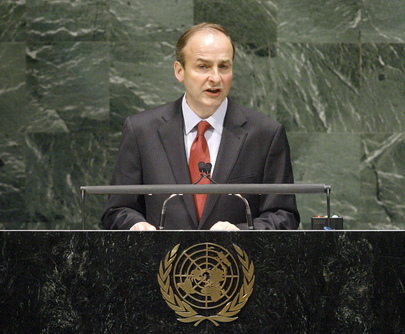 MICHEÁL MARTIN, Minister for Foreign Affairs of Ireland, commended the establishment of UN Women as part of the greater process to reform the Organization, bringing gender equality to women worldwide. He also saluted the “Delivering as One” programme as proof that a greater coherence in the United Nations development activities brought clear and tangible benefits. However, more reforms were needed, notably with the Security Council transforming to reflect twenty-first century realities and to function with increased transparency. Furthermore, the apportioning of expenses of the Organization needed to reflect the capacity to pay and he looked forward to the review of the existing Scale methodology.

Turning to the issues of poverty and hunger, he recalled Ireland’s Hunger Task Force report two years ago which called for a more concerted, comprehensive approach toward ending world hunger. Last week, he had hosted, with the United States Secretary of State, a meeting of international leaders to build a partnership focusing on the first 1,000 days of life. The Secretary-General’s Scaling-Up Nutrition Initiative would receive his country’s full support as well.

In regards to the Middle East peace process, he reminded the Assembly that Ireland’s experience in the Northern Ireland peace process showed that political progress could only be achieved through dialogue. “Maximum restraint for the duration of these talks, which are intended to be — and should be — completed within 12 months, would be a small price for lasting peace,” he stated, and he echoed the sentiment of regret his colleague, the European Union High Representative, expressed that Israel had decided not to extend the moratorium on settlements. A witness to the “appalling humanitarian plight of the people of Gaza” during his visit in February of this year, he heralded the dignity and resilience of the people there, living in conditions that were “quite simply unacceptable”. Even with the delivery of humanitarian and consumer goods, the need for normal commercial activity to resume was essential to Gaza’s recovery.

He then urged Iran to engage constructively and comply with the clear requirements established in various resolutions, including Resolution 1929 (2010), regarding its nuclear programme. He was also proud of his country’s contribution in the Nuclear Non-Proliferation Treaty Review Conference this past May, in particular in the facilitation of a process in implementing in the 1995 resolution of a zone free of weapons of mass destruction in the Middle East. Furthermore, the Convention on Cluster Munitions, negotiated in Dublin in May 2008, had entered into force August this year. On the issue of the continued detention of Aung San Suu Kyi in “ Burma,” he called for her release, as well as the release of all political prisoners in Burma and for the launching of a “genuine, inclusive national dialogue”, as well as the establishment of conditions in which free and fair elections could take place.

In the area of peacekeeping and peacebuilding, he spoke of Ireland’s long history of commitment to peacekeeping missions and of the honour of Ireland’s Permanent Representative as co-facilitator, along with South Africa and Mexico, reviewing and reporting on the Organization’s peacebuilding architecture, which he hoped would revitalize and give renewed focus and impact to the Commission. He then said, in conclusion, that the peace process of Northern Ireland stood as an example of “what can be achieved with patience, imagination and strong international support”. This year, he stated, major steps had been taken towards fulfilling the vision of the Good Friday Agreement, signed 12 years ago, with the devolution of a policing and justice power to a locally elected Minister accountable to the Assembly. Ireland would continue to support the principles and values upon which the United Nations had been founded and he looked forward to participating in international endeavours towards a peaceful and prosperous and secure world.