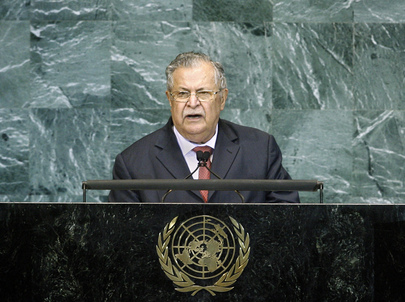 JALAL TALABANI, President of Iraq, said his country had seen a significant decrease in violence and marked improvement in its security situation over the past year, paving the way for withdrawal of United States combat forces. There was also considerable Arab, regional and international interest in the successful 7 March legislative elections, as they expressed their conviction the poll had been transparent and fair. The principal political parties had been in continuous communication and hoped to form the new Government as soon as possible, as any delay would negatively affect the security situation, reconstruction and prosperity. Improved security encouraged many countries to reopen their diplomatic missions and helped broaden the horizons of those relations. Iraq’s assumption to the presidency of the current session of the Arab League, as well as the Arab Summit Conference in March 2011, were important steps towards regaining its position as an effective and responsible member of the international community.

The Iraqi Government would continue to deepen bonds of friends, cooperation and good neighbourliness to strengthen chances of stability and security in the region. Iraq had initiated a five-year, $186 billion plan containing 2,700 strategic projects to develop its economy and aid the return of refugees. Iraq needed the experiences of all its citizens to help build its future, and therefore called upon those receiving and working with Iraqi refugees to disseminate the culture of voluntary return.

He said Iraq’s foreign policy sought to establish international relations based on shared interests and respect for its international obligations. On that basis, it sought better relations with Arab and Islamic countries. It supported the Palestinian people’s struggle for rights, including the establishment of a Palestinian State, and considered the Arab Peace Initiative a practical step towards resolving the Arab-Israeli conflict and accomplishing peace and stability in the Middle East.

Iraq also called for the Middle East to be made a zone free of nuclear weapons and weapons of mass destruction, and for States that had not yet acceded to the Treaty on the Non-Proliferation of Nuclear Weapons to accede to the Treaty and comply with its provisions. With regard to Iranian nuclear production, he said Iraq believed States had the right to use nuclear energy for peaceful purposes and stressed it was important to reach a peaceful solution to the issue. Dialogue and diplomacy were the most successful means to achieve that goal, and any escalation of the matter would hurt the interests of all parties and put the security of the region at risk.

The most important issue that Iraq still faced was getting rid of the burden of resolutions adopted under Chapter VII of the United Nations Charter, and it was very serious about putting an end to those files in 2010. He said it was working very hard with friends and members of the Security Council to settle remaining restrictions in the field of disarmament, the conclusion of remaining contracts of the “oil-for-food” programme and finding the right mechanism to guarantee protection of Iraqi money to replace the Development Fund for Iraq and the International Advisory and Monitoring Board for Iraq. The new Iraqi Government would also work seriously to reach a settlement on issues with Kuwait, such as maintenance of border pillars and compensation of missing Kuwaiti persons and properties that would satisfy all parties and its commitment to Security Council resolutions.

The situation in Iraq was drastically different from when the Security Council had adopted resolution 661 (1990) and the time was right to for the body to review all resolutions adopted against the country. Iraq aimed to build a united country where citizens worked within constitution-based institutions and the rule of law, while human rights were protected, and it had rich natural and human resources to achieve those objectives, he said. But, it needed political and economic support as well as international cooperation to stand on a firm base that would enable it to move towards prosperity.