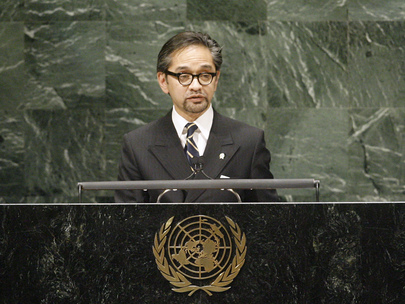 MARTY M. NATALEGAWA, Minister for Foreign Affairs of Indonesia, said the session’s theme, reaffirming the central role of the United Nations in global governance, was a timely topic, as humankind faced a multitude of complex challenges that demanded international cooperation.  The United Nations could play a central role in global governance as it ensured that the full problem-solving potential of every nation was unleashed.  The reform of the United Nations was essential to reflect the contemporary world.  A more representative Security Council would be more effective while the Assembly must be revitalized to make it more efficient.  The Economic and Social Council had to become more relevant to meet its Charter-mandated responsibilities, while the Secretariat had to be made more effective, efficient and cohesive.

Indonesia would continue to contribute to United Nations peacekeeping efforts and maintain the recent momentum on disarmament issues, he said, noting that Indonesia was on track to ratify the Comprehensive Nuclear-Test-Ban Treaty.  Indonesia supported the resumption of direct negotiations between Israel and Palestine, which he called a precious opportunity for the two parties to find solutions on all final-status issues.  His country would maintain its efforts to support the capacity-building of Palestine and support the Palestinian people’s preparation for their final exercise of their right of sovereignty.

Today’s global threats to security demanded more effective concerted action and the United Nations had to play its part to boost global cooperation to fight  non-traditional security threats, such as terrorism, people smuggling, drug trafficking, piracy and money-laundering.  The United Nations framework could also be used to attain more equitable and sustainable development, address climate change and deal with the complex array of natural disasters, including the delivery of international humanitarian assistance.  He gave great importance to next year’s review process of the Human Rights Council, which needed to help all countries promote the cooperation of human rights.

Greater cooperation between the United Nations and regional organizations and initiatives would help make global problems more manageable.  For that reason, Indonesia promoted stronger links between the United Nations and ASEAN and, in that regard, an ASEAN-United Nations summit would be held in Viet Nam this year.  Indonesia was also playing a role in shaping a regional architecture between ASEAN and other countries in the larger Asia-Pacific region.  In an effort to support the development of democracy, Indonesia in 2008 had launched the Bali Democracy Forum, Asia’s only intergovernmental forum on political development, to create a platform for countries to share experiences and best practices.  This December, Indonesia would hold the third Bali Democracy Forum, with a theme of “Democracy and the Promotion of Peace”.  “As the world’s third-largest democracy, Indonesia is proof that Islam, democracy and modernization can go hand in hand,” he said.