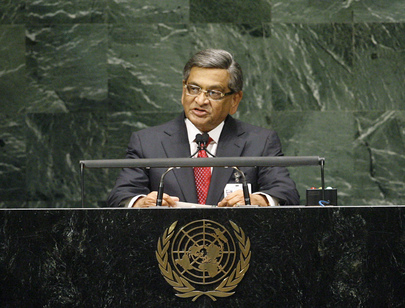 S.M. KRISHNA, Minister for External Affairs of India, said the world had changed dramatically in the 65 years since the United Nations founding. Terrorism, weapons proliferation, piracy and pandemics were just some of the problems that recognized no borders, making the goal of global governance truly formidable. The United Nations role in that regard must be restored to reflect today’s realities. Changes in the global geo-strategic order since 1945 had barely been reflected in its most vital organs, notably the Security Council, which spent most of its time on security issues related to developing nations, yet barely heard the voices of those countries on such matters. It was imperative that intergovernmental negotiations on reforming the Council be brought to an early conclusion. The General Assembly must reclaim its position on issues like appointment of the Secretary-General.

In other areas, he reiterated India’s strong commitment for UN Women, saying his country also had contributed over 100,000 peacekeepers to nearly every major peacekeeping operation and stood committed to those efforts. The United Nations capacities to manage development operations must be augmented and funding increased, he said, noting that India had consistently contributed to such activities through South-South cooperation via the New Partnership for Africa’s Development (NEPAD). India also regarded with the highest priority the attainment of the Millennium Development Goals and believed special attention must centre on the least developed countries, landlocked developing countries, small island developing States and African nations.

As a country vulnerable to the impacts of climate change, India had an important stake in the success of international negotiations to address that phenomenon, he continued. India was doing everything possible to contribute to global action on climate change through an ambitious national action plan and was ready to work in a positive spirit with others to achieve an equitable outcome to those ongoing talks. Also, his Government was committed to achieving universal nuclear disarmament within a specified timeframe. In that context, he called for intensifying dialogue among States and the larger non-governmental community to strengthen international consensus to that end. To defeat terrorism, concerted action must be taken against terrorists and their sponsors. India was party to all major conventions against terrorism and fully supported implementation of the Global Counter-Terrorism Strategy, which was designed to fill gaps in the international legal framework.

Turning to peace and stability in South Asia, he said India had pledged $25 million in aid to Pakistan for flood relief efforts. At the same time, he shared deep-rooted concerns about the growth of militancy and terrorism in that country, particularly because Jammu and Kashmir, an integral part of India, was the target of such Pakistan-sponsored actions. Calling on Pakistan to fulfil its solemn commitment of not allowing territory under its control to be used for terrorism against India, he said credible action against such groups was in the interests of the region. If Pakistan lived up to that commitment, it would significantly help reduce the trust deficit that impeded better bilateral relations. “We are neighbours, and as neighbours, we have an obligation to work together,” he added. He also urged that the global community be steadfast in its engagement with Afghanistan to ensure the success of its reconstruction, and its emergence as a democratic, pluralistic and prosperous society. The existence of sanctuaries for terrorists beyond its borders should be a primary focus.

India’s representative said that once again, regarding Jammu and Kashmir, Pakistan had made false allegations regarding India.  In fact, Pakistan needed to tackle many of its own problems, rather than make comments on the internal affairs of India.  Pakistan should focus particularly on terrorism and how to dismantle it.  The violence in Jammu and Kashmir was being waged by “forces that don’t want peace”.  He noted that free elections in Jammu and Kashmir had been conducted.