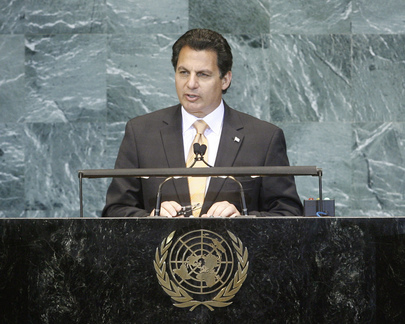 MARIO CANAHUATI, Secretary of State for Foreign Affairs of Honduras, said his country had integrated into the world economy, based on the principles of equal rights, self-determination and non-interference in internal affairs. The Millennium Goal of reducing extreme poverty was ambitious, but it was achievable. The struggle against poverty required greater collective efforts. Access to international markets was more important, but not a substitute for ODA. He stressed the need for greater foreign direct investment in developing countries, access to technology, a reduction in greenhouse gas emission, disarmament and nuclear non-proliferation. Honduras’ President had made an appeal to begin talks as soon as possible on a new global accord that would guide action on the Millennium Development Goals beyond 2015. Poverty was not only the lack of material goods, but also the lack of opportunity. For that reason, Honduras was committed to respecting human dignity, the common good and solidarity.

He said that his country, after extensive consultations with civil society, political parties and other independent sectors, had adopted a national vision and plan, inspired by the Millennium Development Goals. It aimed to create a nation that was educated, healthy, democratic, secure, non-violent, productive, respected human rights, generated decent employment and managed sustainable use of its resources while reducing its environmental vulnerability, as well as a State that was modern, transparent, responsible, efficient, competitive and independent.

The Honduran Government’s first commitment was to help the country’s extreme poor through the “Bono 10,000” programme, which provided education, health and nutrition, including through a school lunch and other food security programmes, he said. The Government was committed to decentralization and improving citizen participation in decision-making, monitoring and evaluation of public policy. Productive programmes such as the United States Millennium Challenge Corporation in Honduras had been enormously beneficial to the population, significantly increasing the income of the farmers participating in the programme.

The Government had also launched a programme to support microfinance and small entrepreneurship, thanks to support from the European Union, Japan and the Taiwan Province of China, he said. In all those programmes, women were a special beneficiary based on the belief that reducing poverty required ending gender inequality. The aim was to create decent employment for the more than 200,000 young people entering the labour force annually. The 2010-2014 national programme promoted investment in job-generating industries, agro-industry and forestry, renewable energy, tourism and infrastructure development, water and sanitation. Such efforts opened a new era conducive to sustained economic growth. Honduras had also adopted laws to reduce its vulnerability to natural disasters and climate change.

Despite socio-economic advancement in many areas, Honduras had suffered a political crisis from which it had been able to emerge, on 29 November 2009, when the Honduran people had turned out in force to vote, he said. Hondurans had exercised their right to self-determination and sent a clear message of their love of democracy and respect for institutions. Within that spirit, the President had promoted amnesty for political crimes and formed a national unity Government comprising all the country’s political parties. He also had decreed creation of a truth and reconciliation commission, an independent body that would work to ensure that the 2009 events would never happen again. He also had proposed the creation of a Secretary of State for Justice and Human Rights. Honduras condemned all forms of racial discrimination and welcomed the upcoming International Year of Afro-descendants. It was also creating a body for the promotion and development of indigenous people and for defending racial equality.