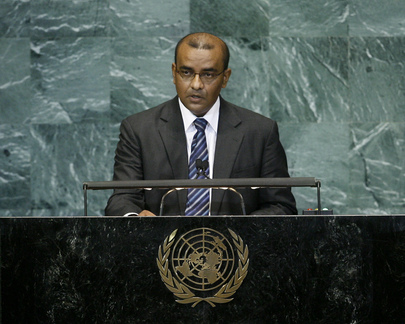 BHARRAT JAGDEO, President of Guyana, said the United Nations had been founded out of noble ambitions grounded in timeless values of peace, equality and justice. But, if those values were to mean anything, the world body must be given life through meaningful and practical responses to the contemporary challenges people faced. And though such challenges were many, he noted three of specific concern: the global efforts to halve poverty and achieve the Millennium Development Goals; fallout from the financial crisis that threatened to undo much of the progress made over the past decade; and a climate crisis that endangered entire nations.

Specifically on the Millennium Goals, he said that, though some progress had been made: “We have not connected the rhetorical support from the developed world for their achievement to actual delivery.” Indeed, at times, it felt like the international system set out to put hurdles in the path of its own efforts to overcome shared challenges. Inconsistencies and lack of coherence between aid, trade and climate, to name a few, created difficulties for developing countries seeking progress.

As such, he called on the United Nations to establish a set of global accountability indicators to transparently monitor whether members of the international community were pursuing policies that, in a holistic sense, helped them to discharge their global responsibilities. Through the Goals, he said, “I believe that we will see that better accountability, properly understood, can help us to rise to the challenges we face.”

He went on to highlight the need to protect and preserve the environment. One major downside of the ongoing destruction of the planet’s natural habitats was that it removed the bedrock of future medical advances. Moreover, such recklessness affected all people: a ton of carbon emitted in Africa or Asia threatened the citizens of the smallest village in North America. Failure to appreciate the need for a joint global response to climate change and loss of biodiversity was not just an abdication of responsibility to some intangible global good; it evinced a very real and measurable threat to all citizens.

Continuing on that topic, he noted the failure to reach agreement on the future of the Kyoto Protocol in Copenhagen this past December, and he continued to hold that the international community needed a legally binding global climate treaty. In the absence of such an instrument, he proposed holding the developed world accountable to the commitments made regarding the immediate short-term ramp-up of financing for climate action in the developing world. He also proposed solving the “vexed” issue of an effective financial transfer mechanism and considering scaling up meaningful sectoral responses that worked in the short-term.

“I want to emphasize that none of this is about asking the developed world to provide us with aid,” he said, adding: “It is about insuring that capital to address climate change is allocated where it can have the biggest impact.” He touched on other topics, including the Copenhagen Accord, saying that even countries that did not associate themselves with the Accord should hold the developed world accountable. He concluded by saying that the United Nations, despite its many limitations, was “our best hope for the advancement of humanity”.