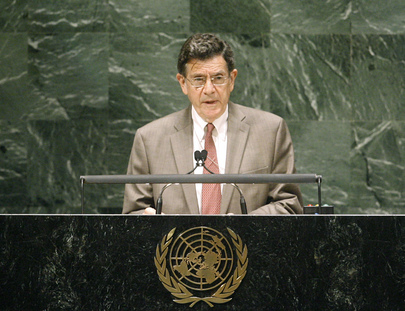 GERT ROSENTHAL (Guatemala) said the financial and economic crisis had had a strong impact on his country’s economic performance. Its national income grew less than one per cent in 2009 due to reduced exports, a contraction in remittances and the collapse of direct foreign investment. That had impacted tax receipts despite multiple initiatives by the Government to increase the tax ratio to deal with increasing demand for social services and public security. Although there had been a modest recovery this year, the intensity of that recovery would depend to a high degree on the uncertain evolution of the international economy.

Also, during the last decade, a raft of illicit activities related to organized crime had taken root in Guatemala, he continued. Trafficking in persons, arms and drugs, as well as money laundering, had expanded in a manner that was quite worrisome, under the double banner born from organized crime’s capacity to co-opt and intimidate. Drug trafficking, in particular, had weakened democratic institutions. In response to that challenge, the Government had associated itself with the United Nations and friendly countries through bilateral and multilateral cooperation. A visible expression of that cooperation was the establishment of the International Commission against Impunity in Guatemala. In addition, the country had joined its neighbours in Central America and Mexico in combating regional criminal networks, as reflected in the decisions adopted during and intersectoral meeting of the region’s senior Foreign Relations Ministers, Attorneys-General and police officials, held in Antigua, Guatemala, only a few days ago.

Continuing, he said Guatemala had been the victim of natural disasters with an unusual frequency, he stated. That reflected the country’s extreme vulnerability to the effects of climate change, given its location in a tropical isthmus. While not fully recovered from the effects of tropical storm Stan which hit at the end of 2005, it was affected by grave drought in 2009 and, in the last few months, the eruption of the Pacaya Volcano, which had caused extensive damage to agricultural production, and tropical storm Agatha in June, affecting 330,000 people and killing 100 people while causing damages estimated at close to a billion dollars.

Guatemala had employed all the resources within its means to address those challenges but had also appealed for international cooperation. The United Nations had been among the first to respond to its call for assistance. Up till now, the focus had been on the emergency phase of those challenges, but it was imperative to also address the reconstruction and transformation phases as soon as possible. The Government had prepared a detailed plan to take on that task. It had convened an international conference of donors, to be held in Antigua, Guatemala, on 11 an 12 October, to introduce that plan. Finally, he said Guatemala harboured the hope that there would be tangible progress this year in the long-delayed reform of the Security Council. Such progress was crucial in order to provide greater legitimacy to the General Assembly. It would also benefit all the main organs of the United Nations and the Organization in its entirety. He then announced Guatemala’s candidature for Security Council membership for the biennium 2012-2013 in the hope of contributing to the work of the Council.