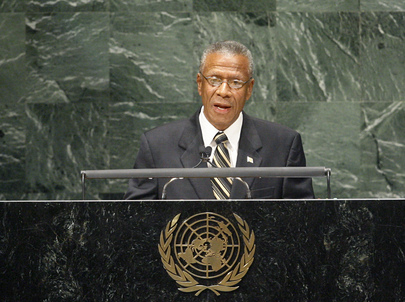 TILLMAN THOMAS, Prime Minister of Grenada, stated that in times of conflict, strife, natural disasters and other humanitarian matters, the United Nations had been the first place to turn to. “Any weakening of its authority and effectiveness cannot be in our best interest,” he asserted. The recent advances made in the United Nations system-wide coherence deserved special commendation, as did the formation of UN Women. Grenada hoped its candidacy to that body’s Executive Board would win support. But, equally, “the United Nations had to recognize its inherent imperatives of democracy”. Continued failure to meaningfully reform the Security Council would deny the body its political legitimacy, he continued, calling for a Security Council seat for small island developing States.

Climate change, he stated, must remain at the top of the global diplomatic and negotiating agenda. It was already undermining small economies, “ruining their societies and threatening their very existence”. The $30 billion in “Fast Start” funding had reached only a small percentage of developing countries, and just a fraction of promised funds had been released. “Clearly this has to be corrected,” particularly for small island developing States.

Although Grenada had made progress on the Millennium Development Goals, there was much more to be done to achieve the Goals in the remaining five years, he noted. If countries were to eliminate poverty, there had to be a comprehensive review of the criteria for determining middle-income status. “A country of 37 per cent poverty and debt-to-GDP ratio of over 100 per cent, as is the case of Granada, cannot be ready to sail the high seas of development financing autonomy.” Concerning health, Grenada registered its strong support for a United Nations high-level meeting on non-communicable diseases, the main cause of mortality in its region.

In support of justice, Grenada, he said, urged the United States “to do what is right and completely lift the harsh economic measures against the people of Cuba, if only on humanitarian grounds”. Furthermore, in the spirit of fair trade, the nation called on the United States to honour the recent decision in favour of Antigua and Barbuda in the World Trade Organization. In closing, he recognized the critical role of the United Nations in almost every facet of global affairs. There would be no international peace and stability if people had no food or clothing, and no security if nations were not free to determine their own destiny. “The world would certainly be a better place if we shared our world’s resources to assist the more vulnerable among us,” he stated.