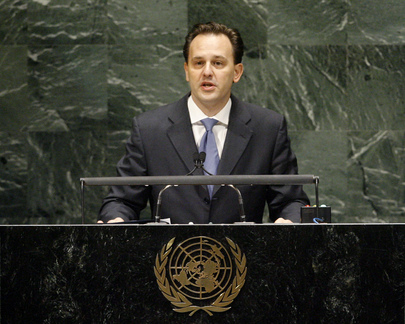 DIMISTRIS DROUTSAS, Minister for Foreign Affairs of Greece, said that efforts on the reform and revitalization of the United Nations; and consequently global governance, needed to focus on two fundamental pillars: increasing the membership of the Security Council with both permanent and non-permanent members, and enhancing and improving the cooperation and coordination of the Organization with other major international and regional organizations, with the goal of making multilateralism work effectively to the benefit of all. Noting that the past few months had witnessed the devastating effects of natural disasters in many areas of the world ranging from Haiti to Russia and from Pakistan to Guatemala, he said what clearly set them apart from natural disasters of the past was the number of people they affected. He called climate change the world’s greatest challenge, which increasingly affected everyone’s lives, including peace and security. In that regard, it was the duty of the international community to lead the world into a new “Green Era” that guaranteed future generations a better and more prosperous future. The Copenhagen Accord represented a basis on which to build further in that context. The focus now needed to be on Cancun and action “must not stop”. For its part, his Government would launch a Mediterranean Climate Change Initiative on 22 October, ahead of the Mexico meeting.

He turned to a number of issues, including the global financial crisis, migration and human rights, saying that remarkable strides had been made in protecting human rights in the past 60 years, yet much more remained to be done, particularly in ensuring a truly comprehensive approach to such rights was promoted. He expressed strong support for the Human Rights Council and said Greece would be a candidate for the year 2012 to 2015. On common security, he said Greece considered the upcoming 2010 OSCE summit as a major milestone in the European Security Dialogue; and thanks to the commitment and engagement of OSCE partners to the Corfu Process, the vision of the 1990 Charter of Paris for a New Europe had finally the prospect to become reality in the European security landscape. In that regard, Greece’s security lay in being a member of the European Union and North Atlantic Treaty Organization (NATO) and it worked so that countries of the region might benefit from the stabilizing influence of their membership in those institutions. In terms of stability, the Balkans was still sensitive. His vision for the Balkans was one of a region in which democracy finally became the norm. He said the world, therefore, had a responsibility in supporting that vision for the region. There were several open issues in the Balkans, one of them revolving around the name of the former Yugoslav Republic of Macedonia. It was not a pedantic dispute, but a regional question with deep historical roots. Greece had already done its part to compromise, and had intensified efforts to reach a settlement through the United Nations negotiating process. He was declaring today Greece’s readiness to reach a solution and extending a hand of friendship and cooperation. The time had come for Greece’s neighbours to take that hand.

On the question of Cyprus, he said he believed the last “Berlin Wall” had to come down, not be strengthened. Cyprus was the victim of invasion and remained occupied by foreign troops — that was the truth and it must end. He truly believed the Greek Cypriot and Turkish Cypriot communities could find solutions, thus enabling both communities to live together peacefully and harmoniously in the reunited European Union member Cyprus. “ Cyprus, Turkey and Greece: for anyone willing to envision the future, our futures are as interwoven as our histories,” he said. Greece and Turkey had a responsibility to cooperate on the Cyprus problem and to facilitate the process. Turkey could prove its commitment by withdrawing immediately its occupation forces, thus boosting both the negotiation process and its own European perspective.

Referring then to Greek-Turkish relations, he said they were an important parameter for stability in the region, and it was not an easy task to turn a long-standing rivalry into good-neighbourliness. Yet, Greece had embarked on a process with Turkey that would radically affect their relations in the coming years. An honest dialogue had been opened and, although they may differ on many issues, such as Cyprus, the open approach could only lead to a progressive resolution of problems. He believed mutual interests could outweigh political differences. “We can and we must resolve these differences through peaceful means,” he said. Some statements and acts still undermined a very genuine and difficult effort — the long-standing threat of war had no place in the European and global family of values. But it was an historical duty to overcome those difficulties.