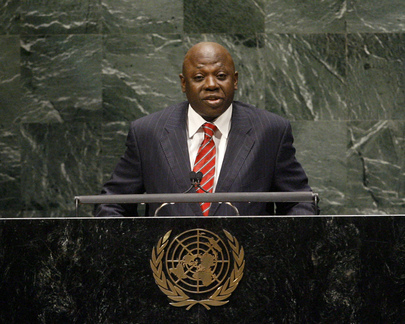 ALHAJI MUHAMMAD MUMUNI, Minister for Foreign Affairs of Ghana, said his country would engage with others in the search for peace and security in Africa, and contribute to global efforts to prevent conflict through preventive diplomacy, peacekeeping and peacebuilding. Indeed, it was time to ensure that countries emerging from conflict did not lapse back into it. Ghana strongly supported the responsibility to protect as the normative framework to prevent genocide, war crimes, crimes against humanity and ethnic cleansing. Caution, however, must be exercised to avoid its abuse. That principle was not intended to undermine sovereignty; it was meant to ensure that sovereign responsibility was exercised in a manner that would prevent mass atrocities seen in Rwanda, Srebrenica and Sierra Leone. Sadly, some of those conflicts lingered today and the global community must assist national authorities requesting such help, with a view to enhancing the capacity of nations that were unable or unwilling to uphold that duty.

While extreme poverty and hunger counted among Africa’s challenges, most countries also grappled with climate change, poor infrastructure and lack of productive capacity, he said. High food prices had reversed impressive economic performance and jeopardized chances of achieving the Millennium Development Goals. Citing increased interest in climate change, notably with the 2007 Bali Action Plan, he said: “We need to sustain that interest” and build on common ground that began with the 1992 creation of the United Nations Framework Convention on Climate Change. Political will was needed for industrialized countries to cut their emissions, as pledges still fell far short of the recommended 25 to 40 per cent cut, which offered a chance of staying below a 2° C average global temperature rise.

Just as there was an aid fatigue, developing countries might soon experience promise fatigue and he urged that $30 billion be implemented for adaptation and mitigation efforts by 2012. Early delivery would boost developing nations’ confidence in the dialogue and show that the developed world was truly committed to negotiations. On the Goals, keeping the promise made in 2000 would require more resources and effective cooperation. Ghana would not compromise in its pursuit of good governance and the rule of law. African countries had acknowledged that impoverishment was due in part to poor governance, which was why many countries had consolidated governance institutions and strengthened their election processes.

In Ghana, food security was a concern, he said, and the Government was implementing a progressive agricultural policy to ensure increased production. As Ghana would soon become an important oil and gas producer, the focus also was on deriving the maximum benefit from oil production. The Government was working to ensure transparency and accountability in managing oil revenues, with a bill to that effect sent to Parliament for approval. Ghana also had made attracting foreign investment an important pillar in its development strategies. Africa was tired of resource-induced violence and he called on the United Nations to help nip the “resource curse” in the bud. Risks posed by external shocks called for more international policy coordination and a renewed commitment to a comprehensive global response to today’s challenges. With that, he reaffirmed Ghana’s commitment to United Nations ideals and urged mustering the political will to strengthen its functions, so that people could be redeemed from war, disease and poverty.