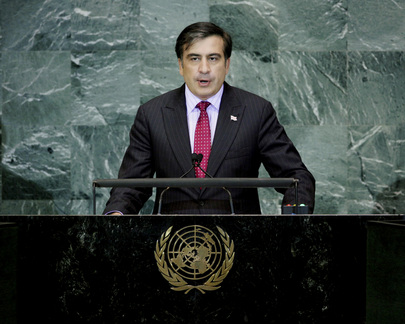 MIKHEIL SAAKASHVILI, President of Georgia, said cooperation was more necessary than ever in the face of global challenges. Gatherings like the Assembly’s general debate were valuable only if they allowed for the shaping of a common vision for concrete action towards peace, development, solidarity and justice. Thanks to coordinated efforts of the international community, as well as the leadership of United States President Barack Obama and Secretary of State Hillary Clinton, direct peace talks had resumed between Israelis and Palestinians. The road to peace, security and justice was still long, yet the goal was so noble and necessary that no effort should be spared. A common objective must be to encourage risk-takers to forge new paths to peace. “Peace is not an easy way, but peace is the only way,” he declared.

Furthermore, peace should be seen as not only the goal, but also the means to any goal. Change had taken place in his country, and he planned to promote a specific vision – a vision for a free, stable and united Caucasus. In the aftermath of full-scale invasion and threats of total annihilation, few believed that Georgia and its Government would survive as an independent and democratic State. He was proud to note that, two years later, his country had succeeded against the odds. Thanks to the commitment of the Georgian people and the support of allies, Georgia was back as a “laboratory” for political reform and social transformation. Local elections last May were proof of such transformation and a milestone for democracy.

Once one of the most corrupt countries of the post-Soviet world, Georgia had since made greater gains in the fight against corruption than any other country over the past five years. Moreover, his country was now ranked by the World Bank as number 11 for ease of doing business. Such rankings showed that Georgia was “winning the peace […] through peace”. He paid tribute to the nearly 1,000 soldiers in South Afghanistan to help the region’s people secure a stable, terror-free future. Georgia was also fighting other common scourges, particularly nuclear trafficking. In the past seven years, his country had intercepted criminals who possessed ingredients to make nuclear devices, cooperating with allies in the international community to do so.

Turning attention to what he called a “grave problem” – Russian occupation of his country – and the lawlessness it bred, which had left two occupied regions in “a black hole of governance”. In those lands, criminals acted with impunity, humans were trafficked and drugs and weapons were smuggled. While strides in achieving the Millennium Goals could be seen, such successes remained bittersweet because they could not be savoured by all Georgians. The Russian Federation, he said, had been violating the ceasefire agreement brokered in August 2008. It had not withdrawn as it had agreed. Therefore, hundreds of thousands of internally displaced people and victims of “the ethnic cleansing campaign led by Russian forces” were prevented from returning to their homes. Georgia responded to Russia’s violations of international law and human rights using “constructive unilateralism” – behaving in a civilized and patient manner and upholding a position of peace.

To that end, he called for “those three isolated United Nations Member States”, which recognized the Russian Federation’s de facto annexation of Georgia’s territories and legitimized the Russian-led ethnic cleansing campaign, to reverse their decision. “It is never too late to overturn a bad policy. The dismemberment of Georgia has failed categorically – and even the Russian Federation will one day need to reverse its disastrous policy.” In that regard, he made three calls to the Assembly. First, he affirmed that Georgia would protect the rights, culture and history of its citizens of the Abkhaz and Ossetian regions who now live behind the “new iron curtain” dividing the country.

Next, he alerted the Russian Federation of the choice it faced: it must either take major part in the ongoing transformation of their common region or watch the transformation happen without it. His country wanted the Russian Federation as a partner rather than an enemy. In that regard, the Georgian Government supported the United States’ reset policy and the European Union’s engagement with Russia. “Instead of fighting each other, we should excel together in modernizing our common region,” he declared. Finally, he called on the international community to help secure peace in Georgia and its broader region.