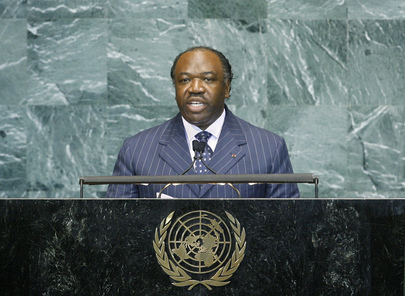 ALI BONGO ONDIMBA, President of Gabon, said his country’s democratic transition had heightened the sense of responsibility for its people. The ongoing process of social economic reform was based on three strategic pillars: green Gabon, industrial Gabon, and Gabon of services. Green Gabon was a cross-cutting approach; industrial depended on developing resources and preserving the environment; and service promoted tourism.

He went on to say that in Gabon a climate council mainstreamed policies into development plans. A partnership with Brazil and France provided for satellite imaging to monitor the rainforests. Other priorities included improving governance, fighting corruption and preserving the environment, efforts that called for international support. Gabon was committed to shouldering its responsibilities in the Security Council.

Given the complexity of new and emerging global crises, he said a new approach to conflict management was needed, as peacekeeping had, for lack of resources, failed to intervene. The United Nations needed the capacity to provide robust peacekeeping missions, however, and he reiterated his call for a culture of conflict prevention, and of saving resources.

Turning to another concern, he said there was uncertainty in Africa as the date for Sudan’s referendum approached, including a fear of “balkanization”. The parties involved should take full stock of their duties in carrying out the referendum. In Darfur, parties should involve themselves in the Doha political process. On other regional issues, he said reconfiguring the United Nations mission in the Democratic Republic of the Congo showed the Organization’s commitment to adapt to changing situations on the ground. The Government should be urged to ensure stability. Parties in the Western Sahara should restart the Manhasset talks to find a political solution acceptable to all. Niger and Madagascar should be supported towards the holding of elections.

On terrorism, he said States should cooperate with the United Nations and should pay attention to the cross-cutting threats of piracy, weapons proliferation and transnational organized crime. As for climate change, Gabon favoured a legally binding instrument and hoped the upcoming Cancun meeting of the States parties to the United Nations Convention on Climate Change would lead to one. The United Nations must adapt to the new international context, notably by revitalizing the General Assembly and reforming the Security Council. He favoured Africa having a permanent seat in the Council. He also urged meeting development promises made, especially those made at the 2005 Gleneagles Group of 8 (G-8) summit and those regarding the Doha Development Round of world trade talks.