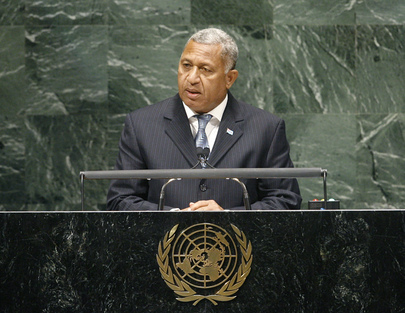 JOSAIA VOREQE BAINIMARAMA, Prime Minister of Fiji, said his country had revamped its foreign policy as it modernized and liberalized its economy.  Member States had to determine their own destinies, but also collaborate towards sustainable world peace, substantive justice, dignity and respect for all.  Those objectives and the noble principles of the United Nations could not be implemented through predetermined political spheres of influence.  International relationships needed to be expanded; rather than bloc voting, countries had to assess and decide each issue on its merit and keep an open mind.  That approach would result in a more just system for all citizens.  Fiji’s shift in foreign policy demonstrated it intended to become a good and engaged global citizen.  It had increased ties with many countries through formal diplomatic relations and sought membership in the Non-Aligned Movement.

There was no better example of Fiji’s commitment to being a good global citizen that its longstanding contribution to peacekeeping and peacebuilding; Fijians were serving in peacekeeping missions in Iraq, southern Sudan, Liberia, Darfur and Timor-Leste.  Fiji was also proud to have been among those in 2006 who voted in favour of preparations for a robust and legally-binding arms trade treaty in 2012.  It also ratified the Convention on Cluster Munitions and remained fully committed to international efforts against terrorism.  Fiji stood firm with all international efforts aimed at peaceful resolution to the territorial and sovereignty disputes, welcoming recent resumption of direct negotiations between leaders of Israel and Palestine.  Fiji was also an active member of the United Nations Special Political and Decolonization Committee and sponsored its 2010 resolution on New Caledonia.  It urged all concerned parties to accelerate progress of provisions of the Noumea Accord.  Over the past year, Fiji’s Government has modernized laws to bring about gender and social parity, removing archaic rules and ensuring compliance with international conventions.

In spite of considerable domestic efforts to cooperate with the international community, Fiji and other small island developing States have had mixed results achieving the Millennium Development Goals.  Those countries and their development partners needed to examine where success had been achieved and where efforts had been unsuccessful, identifying country-specific priorities to achieve the Goals.  The threat of climate change, particularly sea level rise, loomed and the international community needed to work in concert as a responsible international family to mitigate its adverse effects.  He called for promised fast-track funding towards climate change adaptation and mitigation measures to be delivered without delay.  Fiji also pledged to assist in increased representation of Pacific island countries in the United Nations system.

As one of the founding signatories to the United Nations Convention on the Law of the Sea, Fiji had had its oceanic obligations at the core of its foreign policy, he said.  One of the great challenges for Pacific small island developing States was to effectively conserve fish stocks of the Pacific Ocean, which were critical to their livelihoods and economies.  Countries which over-exploit fish stocks had to be informed that the practice was unsustainable.  Owners, investors and harvesters should adhere to international law and chart a path to sustain stocks for the benefit of all.  Meaningful dialogue was essential within respective countries, regions and the world to achieve solutions.  Sovereign States in the community of nations needed to develop and maintain relationships based on respect, dignity and equality.